Are TAVR Hemodynamics Important in the Lower-Risk Population?

How the hemodynamic effects of TAVR and SAVR impact clinical outcomes.

Transcatheter aortic valve replacement (TAVR) has gained rapid adoption based on several trials randomized against surgery.1-4 These trials have provided the medical community with high-quality data comparing open surgical and interventional treatments for aortic stenosis (AS). In some areas, such as survival and stroke, TAVR has done as well as or better than surgery. In other areas, such as paravalvular leak and pacemaker implantation, surgery has performed better. One area where TAVR has consistently shown better results than surgery is forward flow hemodynamics. Both the balloon-expandable and self-expanding valves that are approved in the United States have been shown to be effective treatment options, with balloon-expandable valves demonstrating equivalence and self-expanding valves demonstrating superiority in terms of effective orifice areas (EOAs) and mean gradients compared to the surgical valves.4,5 The differences appear to be small, and both surgery and TAVR relieve AS well and show equivalent quality of life (QoL) at 6 months. This should raise the question: Are these small differences in EOA and mean gradient important now, and do they gain more importance as we move to younger, lower-risk patients?

There is no question that symptomatic severe AS is a problem associated with high mortality without correction of the stenosis. Less clear is how detrimental lesser degrees of AS are. How many of us would volunteer to have asymptomatic moderate or even mild AS rather than a normal aortic valve? Would we do this even if we could be assured that our mild or moderate AS would not progress? I suspect not. With AVR for severe AS, either with TAVR or surgery, we exchange severe AS for less severe AS, but it is still not a normal valve with normal hemodynamics. In this article, we examine whether the residual AS left after AVR is important, with a focus on the younger, lower-risk population.

Until the first successful TAVR in 2002,6 our only option for treating AS was surgery. Survival after surgery was better than untreated severe symptomatic AS, but is it equal to the normal population? Although isolated articles can be found claiming that survival after AVR equals that of the normal population, it is the opinion of these authors that this would represent a statistical anomaly and publication bias because surgeons, like most physicians, tend to publish good outcomes. A source without this bias and well versed in the study of survival as it relates to the normal population is the insurance industry. Survival after surgical AVR (SAVR) has been studied and it has been found that for both mechanical and tissue valves, survival after AVR does not reach that of the normal population.7 In fact, the younger you are at the time of AVR, the more life-years you lose compared to the normal population. Surgeons have always considered SAVR as exchanging native AS for prosthetic valve disease, which is much better but not normal functioning. Why this survival gap exists is an important question. It may exist because we are correcting AS too late and that the heart has already suffered irreversible damage. It may also be that we do not completely correct AS and that this lower-grade AS has a negative effect on long-term survival.

The concept of prosthesis-patient mismatch (PPM) was first introduced in 1978 by Rahimtoola as an aortic valve that did not match a normal EOA for that patient.8 By this definition, all aortic valves, short of those in the Ross procedure, would show PPM. PPM has subsequently been defined and divided by Dumesnil and colleagues into severe (EOA < 0.65 cm2/m2), moderate (0.65–0.85 cm2/m2), and absent (> 0.85 cm2/m2).9 After SAVR, PPM has been associated with higher early and late mortality as well as less left ventricular mass regression.10-13 A meta-analysis by Head and colleagues, which included 27,186 patients and 133.141 patient-years of follow-up, showed both moderate and severe PPM increased all-cause mortality (hazard ratio, 1.19 and 1.84, respectively).14 This relationship was consistent over the 12-year time period. In randomized trials, SAVR has consistently shown more PPM than TAVR, and severe PPM has been associated with increased mortality.15 Because younger, lower-risk patients will be expected to live longer, any PPM after AVR will be increasingly important.

Most studies of the hemodynamics of both surgery and TAVR have been performed while patients are at rest. This leaves the question open of how these valves react to the increased flow during exercise that is more likely to occur in the younger patient. In Rahimtoola’s original article, he mapped out the gradient versus EOA at physiologic normal flow and showed where most surgical valves existed on that graph (Figure 1).8 For the many older, more sedentary patients currently being treated, this is likely satisfactory. However, what happens in younger patients who are more likely to engage in physical activity requiring an increase in aortic flow with increased cardiac output? 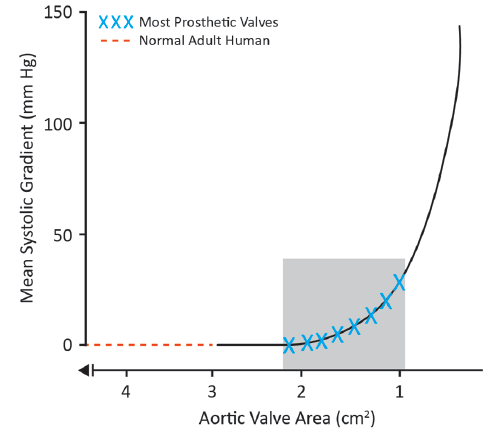 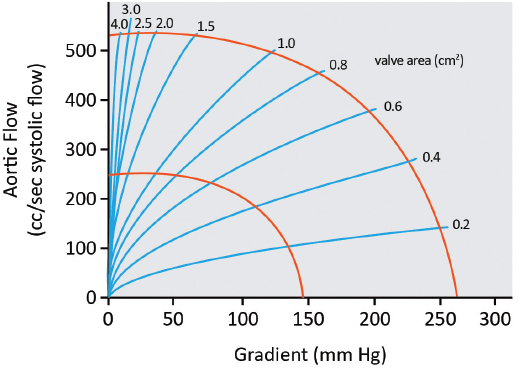 Figure 1 shows that increased aortic flow will shift the line to the left, placing the box for surgical valves in a higher gradient area. Another way to look at this is the theoretical curves that can be generated for aortic flow versus gradient at a series of different EOAs (Figure 2).16 If the EOA of a “normal” aortic valve is 3 cm2, we can double the normal systolic flow of 250 mL/s to 500 mL/s without an appreciable increase in gradient. If we look at the middle of the graph in Figure 1 and take an aortic valve with an EOA of 1.5 cm2, then a doubling of normal flow leads to a gradient of 55 mm Hg. Examination of Figure 2 shows that we need to achieve an EOA of approximately 2 cm2 before we can substantially raise aortic flow without a large increase in transvalvular gradient. This is because the gradient is proportional to the area available for flow, which is related to the square of the EOA radius. Below 2 cm2, the area available for flow rapidly diminishes.

Is this inability to increase flow without also increasing the transvalvular gradient related to the decreased long-term survival seen in SAVR, especially in younger patients? That is difficult to say from the available data, but achieving an EOA of 2 cm2 or greater would seem to be a reasonable goal in younger patients to allow physical activity without a large gradient penalty. A hint at how activity may be related to PPM comes from the SURTAVI trial.4 Using the summary Kansas City Cardiomyopathy Questionnaire (KCCQ) to measure the patients’ perception of their QoL, TAVR has a faster increase than surgery, but by 6 months, both are equal and show a large improvement in QoL and remain equal at 1 year (Figure 3A). The KCCQ summary considers multiple domains for QoL and is filled out by the patient generally while sitting somewhere at rest. 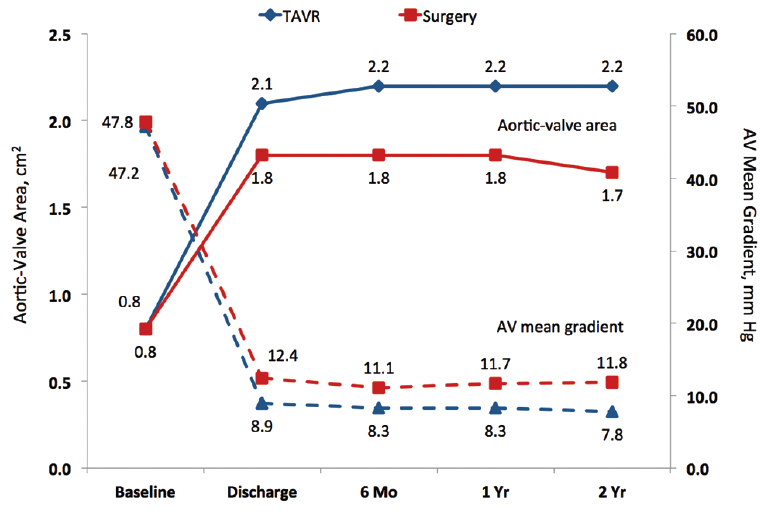 A more objective evaluation of the ability to increase aortic flow would be the 6-minute walk test. In SURTAVI, a 6-minute walk distance was measured for patients undergoing either SAVR and TAVR at preprocedure, 1 month postprocedure, and 1 year postprocedure. The 6-minute walk distance improved from baseline to 1 month for TAVR and fell for SAVR. This should not surprise us, as these patients are recovering from open heart surgery. At 1 year, however, TAVR maintained its improved 6-minute walk distance and SAVR improved from baseline but still statistically less than the improvement seen with TAVR (Figure 3B). At the current time, we can only speculate as to why SAVR does not catch up completely to TAVR given the equal QoL by summary KCCQ, but we know from SURTAVI that the mean EOA was > 2 cm2 for TAVR and < 2 cm2 for SAVR (Figure 4).

In both SAVR and TAVR, long-term durability and the threat of structural valve deterioration (SVD) gain in importance as we move to younger and lower-risk patients with potentially longer life spans. Durability is addressed in greater detail elsewhere in this supplement, so we will just note that evidence exists that the smaller the EOA and the higher the initial mean gradient are in SAVR, the more likely and sooner the patient will develop SVD.17 Because this is one factor that we know hastens SVD, it would make sense to avoid this as much as possible by achieving the highest EOA and lowest gradient possible.

TAVR has seen a progressive move to lower-risk patients and is currently a class I indication in high-risk patients and a class IIA indication in intermediate-risk patients in the United States guidelines. It can be argued that the intermediate-risk indication is only a class IIA based on the fact that the SURTAVI results were unavailable when these guidelines were published, and intermediate-risk use will likely receive a class IA recommendation in the next iteration of these guidelines. Two low-risk randomized trials in the United States are now complete and data are expected in 2019. If the results of these trials are positive, then a low-risk indication will likely be available by 2020 or sooner. As we move down the risk scale, we must also consider age as well as lifestyle and activity. We believe that hemodynamics are increasingly important for both SAVR and TAVR as we move to more active patients and that an EOA of at least 2 cm2 is a worthy goal.