Reviewing the steps and devices needed to achieve a successful postclosure of large-bore access.

HOW I DO IT

The procedure for postclosure of large-bore access sheaths should ideally be done in the cardiac catheterization laboratory with fluoroscopic availability and devices accessible to deal with imperfect closure. Initially, the patient should be positioned with dressings removed and retention sutures cut, while ensuring that the sheaths and attachments do not lead to inadvertent retraction or withdrawal from the artery.

I recommend achieving access in the contralateral common femoral artery. This affords multiple additional strategies to guide closure, confirm hemostasis at the end of the procedure, and perform maneuvers to manage bleeding should closure fail.

I usually place a 5-F sheath using ultrasound and micropuncture techniques. Then, a standard crossover of the distal aortic bifurcation is performed using an Omni Flush catheter (AngioDynamics) into the distal external iliac artery over a 0.035-inch hydrophilic wire. Alternative options include using an internal mammary catheter. In some cases, the large-bore sheath may be nearly occlusive in the common or external iliac artery and may need to be partially withdrawn to allow the angled Glidewire guidewire (Terumo Interventional Systems) to pass. The Omni Flush is advanced into the contralateral iliac artery. I then move an 0.018-inch wire past the large-bore sheath into the superficial femoral artery. The wire may not pass the large-bore sheath easily, and extensive manipulation should be avoided rather than risk vessel dissection. In those cases, the 0.018-inch wire can be left in the distal external iliac artery. The Omni Flush catheter is connected to the contrast manifold with a Y adapter, allowing the 0.018-inch wire to stay in place.

Next, the large-bore catheter is removed and a 0.035-inch wire is advanced into the proximal thoracic aorta. If the device is an Impella catheter (Abiomed, Inc.), then the rewiring port is used. If simply removing a large-bore sheath, such as for aortic valvuloplasty, then the wire is advanced as usual through the hemostatic valve. If an extracorporeal membrane oxygenation cannula is being removed, then an 18-gauge needle is used to puncture the nonbraided portion of the cannula, and an 0.035-inch wire is inserted. After removal, a sheath that is approximately 3 F smaller than the one removed is inserted over the 0.035-inch wire. The site should be inspected for bleeding. In most cases, there is sufficient arterial elasticity and recoil such that hemostasis is present despite a smaller sheath than was removed. If not, then progressively larger sheaths can be inserted to obtain acceptable bleeding control. An assistant applying soft manual pressure can be helpful.

A second 0.035-inch wire is advanced into the proximal thoracic artery alongside the first wire and the sheath is removed. Over one of the 0.035-inch wires, an 8-F sheath is inserted (Figure 1). This sheath tents the artery, allowing a better chance for optimal needle capture with the Perclose ProGlide device. Over the remaining wire, a Perclose ProGlide device is deployed on top of the 8-F sheath. The Perclose device and wire are removed and the suture is tightened over the remaining 8-F sheath. The site is inspected for hemostasis, and angiography can be performed to confirm hemostasis, either from the ipsilateral or contralateral access. If hemostasis is present, then the operator can decide whether to use an 8-F Angio-Seal device (Terumo Interventional Systems) or an additional Perclose suture, or if manual compression can be deployed. When choosing, considerations include body habitus, calcified disease in the femoral vessel, and vessel size. Completion angiography can be performed from the contralateral access to confirm the patency of the vessel and hemostasis. 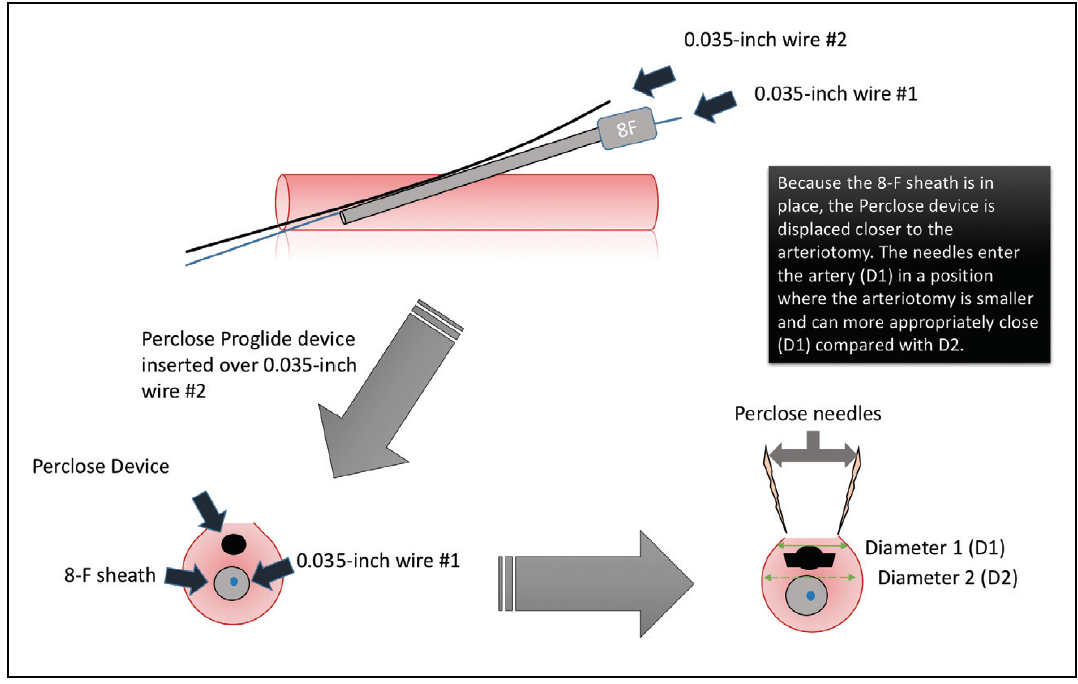 Another large-bore closure device is the Manta device (Teleflex). Available in 14- and 18-F sizes, it can close sheaths ranging from 12- to 25-F outer diameter. It requires measuring the distance from the skin to the arteriotomy prior to sheath insertion; but for postclosure, a technique using a marking pigtail to measure this distance has been described.1

Complications of this technique are centered around inadequate hemostasis, inadvertent closure of the access site by closure devices, or dissection of the arteries by guidewires or sheaths. To mitigate these situations, the operator must be facile with crossover techniques. If inadequate hemostasis occurs, an Ansel sheath can be advanced over the previously placed 0.018-inch wire and balloon occlusion of the iliac artery can be performed if the site of bleeding cannot be visualized. Alternatively, a balloon can be inflated in the common femoral artery at the arteriotomy to assist in obtaining hemostasis. Similarly, if thrombus, dissection, or vessel closure is observed, balloon angioplasty can be performed. In rare instances, a covered stent can be placed to treat dissection, uncontrolled bleeding, or refractory closure. The size of the Ansel sheath placed is dependent on the potential size of the covered stent that may be required. For example, up to a 7.5-mm vessel can be treated with an 8-mm Viabahn covered stent (Gore & Associates) over an 0.018-inch wire through a 7-F sheath. Larger stents require 8-F or larger sheath.

The postclosure technique is an efficient means to close large-bore access sites if preclosure has not been performed. Using two wires and applying a suture-mediated closure device over another sheath favors more successful suture deployment and closure. When coupled with a crossover technique, these access sites can be closed safely, efficiently, and effectively.

Navigating Coronary Procedures in ASCs During the COVID-19 Era