Clinical Implications and Treatment of Coronary Microvascular Obstruction in STEMI

Primary percutaneous coronary intervention (PCI) represents the preferred reperfusion strategy for patients presenting with acute ST-segment elevation myocardial infarction (STEMI) and aims to restore epicardial infarct-related artery patency and achieve microvascular reperfusion as early as possible. However, in one-third to one-half of patients, primary PCI does not result in effective myocardial reperfusion due to the occurrence of coronary microvascular obstruction (MVO).1 Importantly, despite advancements in the treatment of STEMI in the last decade, 1-year cardiac mortality in all-comer patients with STEMI treated with primary PCI has reached a plateau of approximately 7% to 8%, while morbidity caused by the development of adverse left ventricular (LV) remodeling and heart failure has increased.2 The occurrence and extent of MVO is an important predictor of both cardiac mortality and rehospitalization for heart failure.3 Thus, MVO represents an important therapeutic target in patients with STEMI undergoing primary PCI.

Because MVO can be assessed using different techniques and at different points after STEMI, its reported prevalence is variable, ranging from 5% to 60% according to the methods used to assess the phenomenon and patient characteristics.1 In particular, MVO can be detected by coronary angiography (the so-called no-reflow, defined as TIMI [thrombolysis in myocardial infarction] flow grade ≤ 3 with a myocardial blush grade 0–1), myocardial contrast echocardiography, as an incomplete ST-segment resolution (STR) on electrocardiography, or directly by invasive measurement of the index of microvascular resistance (IMR) using a diagnostic guidewire.1 However, cardiac magnetic resonance (CMR) is the most sensitive and specific technique and represents the gold standard for in vivo MVO detection and quantification. As a consequence, the incidence of MVO as assessed by CMR is higher when compared with angiographic no-reflow (50%–60% vs 20%–30%).4,5

Pathogenic mechanisms underlying the occurrence of MVO are multiple and interacting (Figure 1),1 including ischemic injury followed by reperfusion injury, distal embolization, and individual susceptibility. The most important clinical predictor of ischemia-related damage is ischemic time, but the ischemic extent (ie, area at risk) plays an important role.6 When ischemia lasts > 3 hours, the ischemic injury is potentiated by the reperfusion injury, producing severe capillary damage with endothelial gaps associated with extravasation of erythrocytes that, in turn, favor the occurrence of intramyocardial hemorrhage (IMH). Indeed, IMH was associated with the duration of ischemia and necrosis and represents a hallmark of reperfusion, whereas no IMH was observed in animals with permanent coronary occlusion.6-8 Distal embolization is a consequence of small emboli originating from the epicardial coronary thrombus and fissured atherosclerotic plaques during primary PCI, but spontaneous embolization may also occur before PCI.9 Genetic predisposition and preexisting microvascular dysfunction, particularly in patients with multiple cardiovascular risk factors, may be associated with an increased risk of developing MVO.1,10 Another factor modulating individual susceptibility to MVO is the presence of ischemic preconditioning (IPC), which seems to protect both the myocardium and the coronary microcirculation. Accordingly, preinfarction angina may help prevent MVO by inducing IPC.11 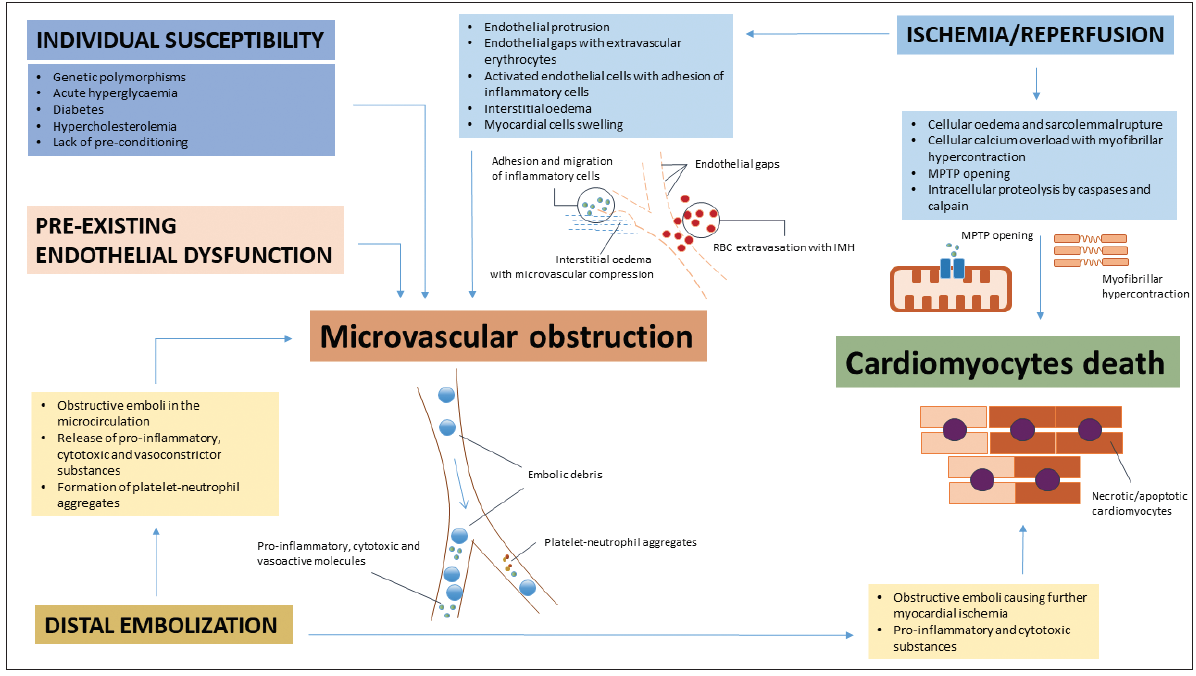 The occurrence of MVO has relevant prognostic implications. MVO is associated with adverse LV remodeling and subsequent risk of developing heart failure, along with increased short- and long-term mortality after primary PCI.3,12,13 In particular, several studies demonstrated that TIMI flow ≤ 2 has been shown to portend an increased risk of adverse remodeling at 6 months and mortality at 5-year follow-up,12 while myocardial blush grade 0–1 increases the risk of adverse remodeling at 6 months and total mortality after 16 months of follow-up.14 CMR studies confirmed that the occurrence of MVO was associated with a higher risk of adverse LV remodeling and death at follow-up.15,16 Of note, recent evidence supports that MVO may be more predictive of major adverse cardiovascular events (MACE) than infarct size itself. Indeed, the presence of MVO was still significantly associated with 1-year all-cause mortality, even after adjustment for infarct size,3 and in another study, MVO but not infarct size predicted cardiac mortality after 2-year follow-up.17 Furthermore, recent data revealed that IMH, an expression of a more severe microvascular injury, leads to a residual myocardial iron deposition and a local prolonged inflammatory activation in the subacute phase after MI.18 Accordingly, CMR studies showed that IMH was closely related to the development of adverse LV remodeling and portended worse clinical outcomes.19 A study by Carrick et al showed that IMH was more closely associated with adverse clinical outcomes than MVO.20

In the last decades, many experimental and clinical studies evaluated the cardioprotective effects of both pharmacologic and nonpharmacologic therapies (Table 1).21-32 The most relevant approaches are discussed herein. 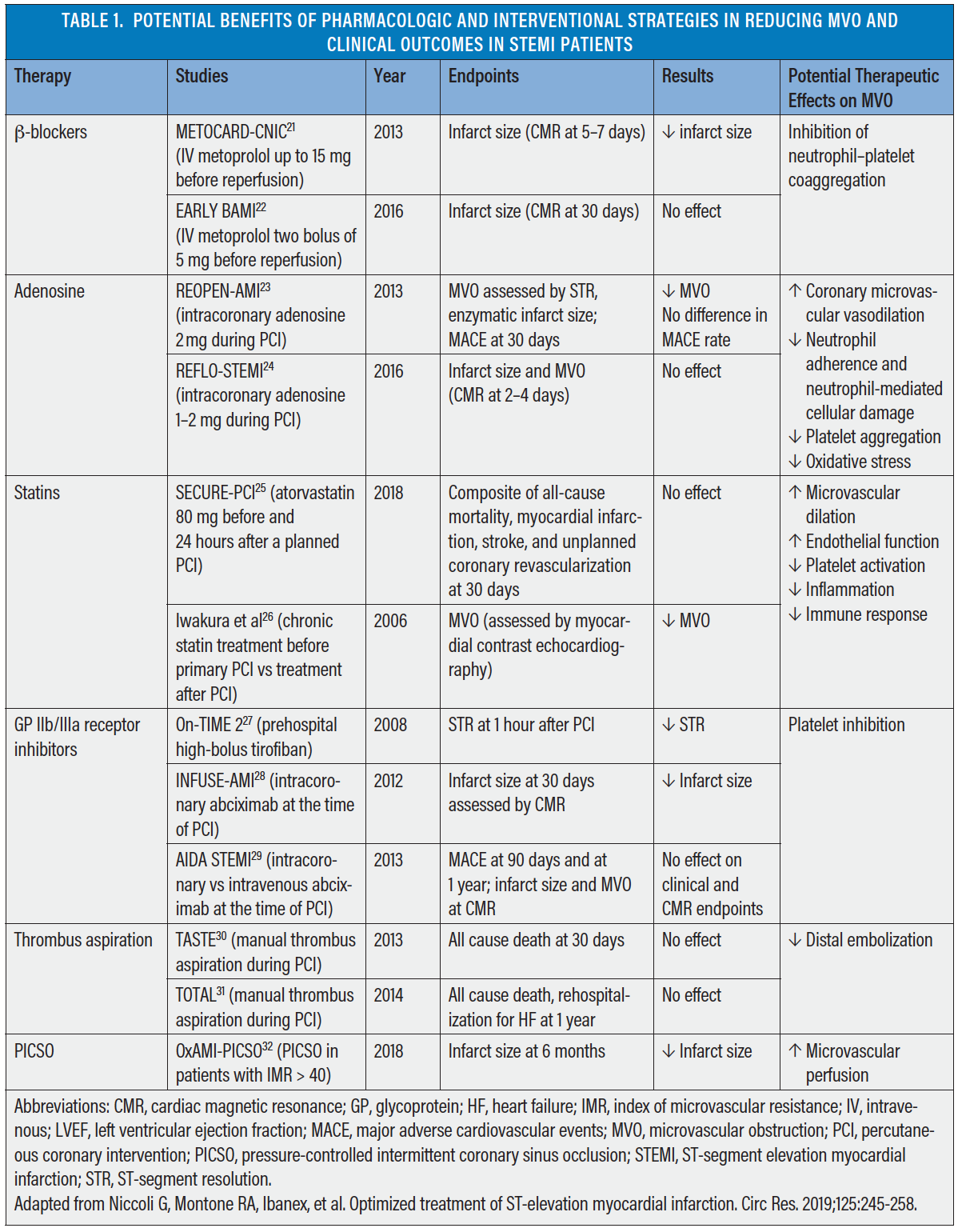 Most clinical studies have evaluated the effect of β-blockers on infarct size and cardiomyocyte protection, but only a few preclinical studies have explored possible effects on MVO.5 Data from animal models demonstrated that metoprolol administration before reperfusion reduced infarct size and the occurrence of MVO by modulating the inflammatory response during the acute phase of MI.33,34 In the METOCARD-CNIC trial, intravenous metoprolol (3 doses X 5 mg) administered in the ambulance before primary PCI reduced infarct size, prevented adverse LV remodeling, and lowered hospital readmissions for heart failure.21 Of note, the cardioprotective effect of metoprolol was time-dependent.35 However, the EARLY BAMI trial failed to show any reduction in infarct size at 1 month with twice-daily 5-mg intravenous metoprolol administered just before primary PCI.22 The European Society of Cardiology STEMI guidelines propose that intravenous β-blockers should be considered at the time of presentation in patients undergoing primary PCI without contraindications, with no signs of acute heart failure, and with a systolic blood pressure > 120 mm Hg (class of recommendation IIa, level of evidence A).36

Adenosine is an endogenous nucleoside characterized by a short half-life (< 2 seconds) and by several pleiotropic effects. Adenosine is a potent vasodilator of coronary microcirculation through stimulation of A2 receptors, and it has also anti-inflammatory properties. Moreover, adenosine may limit reperfusion injury by mimicking IPC mechanisms, have antiapoptotic effects, and stimulate angiogenesis.37 In the REOPEN-AMI trial,23,38 high dosages of intracoronary adenosine, given after thrombus aspiration through the aspiration catheter, was associated with a significant reduction in the occurrence of MVO (assessed by STR) in the enzymatic infarct size when compared with placebo or sodium nitroprusside, which translated into a reduction of MACE and better LV remodeling at 1-year follow-up. However, in the REFLO-STEMI trial, intracoronary administration of adenosine failed to show any benefit compared with standard primary PCI, with a similar extent of MVO but an increase in infarct size and MACE at 30 days and 6 months.24

Experimental studies demonstrated that acute statin treatment might have beneficial effects on microcirculation related to lipid-independent pleiotropic effects, such as improvement of endothelial function, along with anti-inflammatory and antithrombotic properties.5 A post hoc analysis from the SECURE-PCI trial showed that the subgroup of patients undergoing primary PCI had a nearly 50% reduction in 30-day MACE with high-dose atorvastatin (administered before and 24 hours after primary PCI) compared with placebo.25 At the same time, ongoing statin therapy at the time of STEMI was associated with a lower rate of MVO, better functional recovery of myocardial function after 6-month follow-up, and a reduced infarct size when compared with patients not taking statins.26

The possible benefit of prehospital administration of glycoprotein IIb/IIIa inhibitors is a matter of debate, and results from clinical studies have been mixed.5 The On-TIME 2 trial showed that a routine prehospital initiation of high-bolus dose tirofiban might improve STR and clinical outcomes after PCI.27 In contrast, in a retrospective post hoc analysis, Amier et al showed that the use of glycoprotein IIb/IIIa inhibitors was associated with a higher risk of developing IMH.39 The route of glycoprotein IIb/IIIa inhibitor administration was also the subject of clinical investigations because higher local concentrations can be achieved with intracoronary administration. Accordingly, the INFUSE-AMI trial reported a significant reduction in infarct size assessed with CMR imaging after intracoronary administration of abciximab compared with no abciximab in patients with large anterior STEMI.28 On the other hand, the AIDA STEMI trial directly compared intracoronary and intravenous abciximab administration showing no difference in the rate of MACE after 90 days and 1 year.29 Consistently, the CMR substudy showed no differences between groups for myocardial damage and reperfusion injury, including a similar extent of MVO.40 Of note, glycoprotein IIb/IIIa inhibitors represent the only therapy proposed in the current European Society of Cardiology STEMI guidelines to treat MVO, suggesting that they should be considered for a bailout if there is evidence of no-reflow or a thrombotic complication (class of recommendation IIa, level of evidence C).36

Experimental studies over the past 3 decades demonstrated a cardioprotective role for ischemic conditioning, but clinical studies provided conflicting results. In the LIPSIA CONDITIONING trial, postconditioning alone failed to improve myocardial salvage and MVO by CMR, but the association of postconditioning with remote IPC was associated with myocardial salvage, although MVO reduction was not significant, resulting in a reduced rate of MACE and new congestive heart failure after STEMI.41 A recent National Heart, Lung, and Blood Institute–sponsored trial by Traverse et al found that ischemic postconditioning failed to reduce infarct size in patients with STEMI, but it reduced MVO and improved LV functional recovery.42 Similarly, a study by Mewton et al demonstrated that ischemic postconditioning reduced MVO in patients with STEMI treated with primary PCI.43 However, the recent large CONDI-2/ERIC-PPCI trial powered for clinical endpoints demonstrated that remote ischemic conditioning did not reduce the occurrence of cardiac death or hospitalization for heart failure at 12 months in patients with STEMI undergoing primary PCI.44

Initial studies demonstrated that the use of manual thrombus aspiration during primary PCI reduced MVO occurrence. However, these promising results did not translate into a clinical benefit in subsequent randomized trials.30,31 Thus, the routine use of manual aspiration is not recommended in the current guidelines.36 However, in patients with angiographic evidence of a large thrombus burden, the use of the AngioJet mechanical thrombectomy device (Boston Scientific Corporation) demonstrated an acute improvement in STR and a lower MACE rate at 1 year compared with the direct stenting group.45

The pressure-controlled intermittent coronary sinus occlusion (PICSO) during primary PCI represents another interventional approach that may reduce MVO.32 Indeed, PICSO may improve microvascular perfusion by redistributing venous blood to the border zone of the ischemic myocardium, enhancing washout of deleterious agents from the microcirculation and inducing the release of vascular growth factors from the venous endothelium. Of note, PICSO has been shown to reduce infarct size both in experimental and small clinical studies. However, evidence of improved clinical outcome is still lacking.

At the same time, future studies should evaluate potential benefits of therapies on patients with a higher risk of developing MVO (ie, high thrombus burden, large anterior STEMI), while excluding patients with a low probability of having a favorable response to MVO treatment (ie, late-comer [ischemic time > 12 hours] patients, small area at risk). Further studies are needed to evaluate if a precision-medicine approach using an invasive assessment of microvascular resistance by IMR during primary PCI may be useful to select patients requiring adjunctive therapies. OxAMI-PICSO, an observational study that used IMR > 40 as a cutoff to stratify patients for PICSO, demonstrated that infarct size 6 months after primary PCI was lower in the PICSO group; there are currently three ongoing STEMI trials evaluating this approach.32

Finally, as multiple pathogenic mechanisms are involved in determining both infarct size and the occurrence of MVO, a multitargeted approach using a combination of therapies may be more effective to achieve effective cardioprotection that translates into improved clinical outcome.