A review of the anticoagulant and antiplatelet agents currently available for the treatment of STEMI patients undergoing PPCI.

Acute ST-segment elevation myocardial infarction (STEMI) comprises 25% to 40% of myocardial infarction (MI) presentations, representing a major cause of morbidity, mortality, and disability worldwide.1,2 Primary percutaneous coronary intervention (PPCI) is unequivocally the treatment of choice to achieve timely reperfusion of the infarct-related artery in STEMI.1,2 Advancements in STEMI care over the years, including antithrombotic approaches, have contributed to improvements in short- and long-term outcomes.1,2 Antithrombotic therapies include both antiplatelet and anticoagulant agents that are used in both the acute and chronic phases of patients undergoing PPCI.3 The rationale for both antiplatelet and anticoagulant therapies in STEMI care is to respectively antagonize activated platelets recruited at the site of injury of the arterial vessel wall and inhibit the excessive levels of thrombin being generated (Figure 1).3-6 Several classes of antiplatelet and anticoagulant agents, available for either intravenous (IV) or oral administration, are currently approved for the management of patients with acute STEMI undergoing PPCI.3-6 The acute phase of STEMI is characterized by the highest risk for thrombotic complications, underscoring the need for fast-acting IV antithrombotic therapies.3 Oral antithrombotic approaches are also key in the acute phase of STEMI care and are paramount in the chronic phase to reduce the risk of ischemic recurrences. 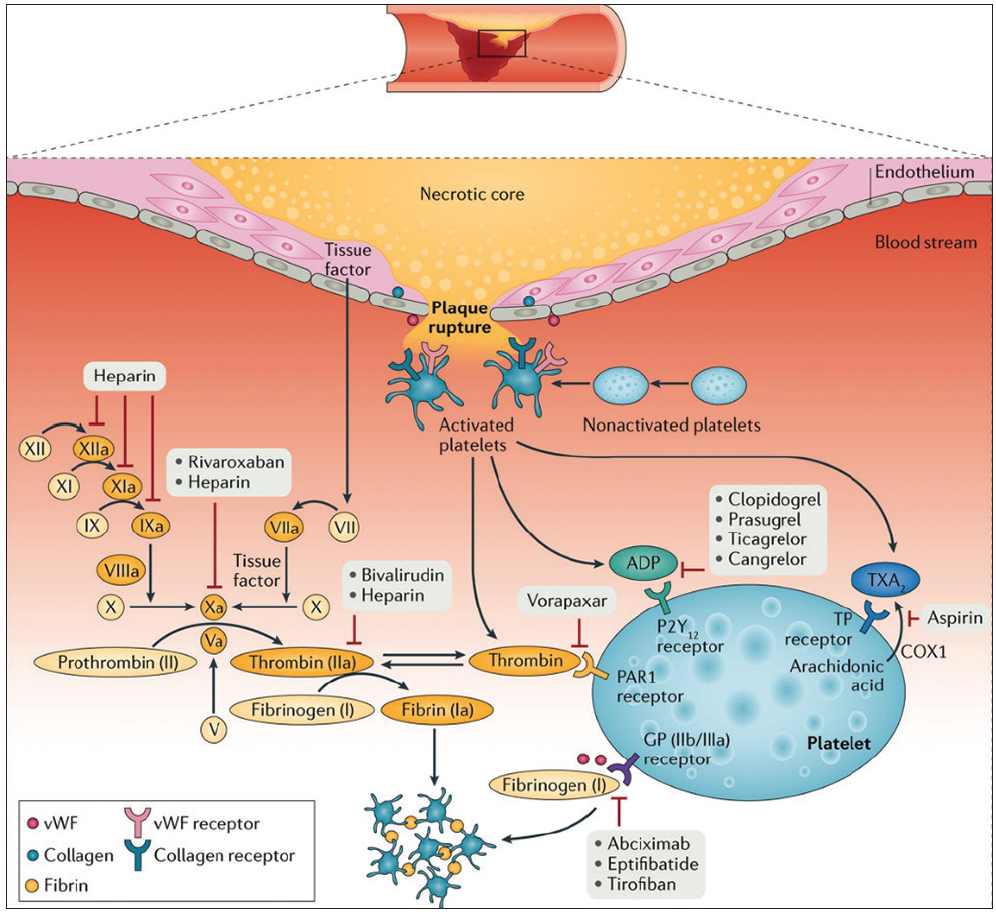 Anticoagulant drugs available for IV use in PPCI include the indirect thrombin (factor IIa) and factor Xa inhibitors (unfractionated heparin [UFH] and low-molecular-weight heparin [LMWH]) and a direct thrombin inhibitor (bivalirudin).3-6 The direct factor Xa inhibitor fondaparinux is not recommended in PPCI because of its association with catheter thrombosis. Although UFH has never been formally evaluated in a placebo-controlled trial, it is the most broadly used anticoagulant. In many systems, a fixed bolus of UFH is routinely administered upstream at the time of clinical presentation. Dosing of UFH can then be titrated to target-recommended activated clotting times, taking into account the use of glycoprotein IIb/IIIa inhibitors (GPIs).3-6 Enoxaparin is the most extensively tested LMWH in PCI. However, trial data of enoxaparin in PPCI are limited and, overall, it is infrequently used in clinical practice.3 Although several trials support the efficacy and safety of bivalirudin compared with heparin plus routinely or provisionally administered IV GPIs in acute coronary syndrome patients undergoing PCI, the benefit of bivalirudin in STEMI patients undergoing PPCI has been subject to controversy.7 Overall, results from clinical trials, as well as data from several meta-analyses indicate that compared with UFH, bivalirudin yields similar rates of ischemic events and reduces major bleeding, with a signal toward a reduction in all-cause and cardiac mortality.3,7 The latter appears to derive from the association between bleeding complications and adverse prognosis, including mortality.8 This makes bivalirudin an attractive drug in patients at high risk of bleeding. However, reduced bleeding occurs at the expense of an increased risk of acute stent thrombosis,3,7 which appears to be attenuated with a preprocedure bolus of UFH, as well as with the prolongation of bivalirudin infusion for up to 4 hours after the PCI procedure. Therefore, these measures should be considered if bivalirudin is being utilized.

IV antiplatelet drugs include the GPIs (abciximab, eptifibatide, and tirofiban) and the P2Y12 receptor inhibitor cangrelor.9 Although the cyclooxygenase-1 inhibitor aspirin is also available in IV formulation in some countries, it is most commonly administered orally. GPIs can be classified into small (eptifibatide, tirofiban) and non-small (abciximab) molecules.9 However, the small-molecule GPIs (double-bolus eptifibatide or high-bolus-dose tirofiban) are most commonly used given that the commercialization of abciximab has largely ceased. GPIs target the final pathway of platelet aggregation, competing with von Willebrand factor and fibrinogen for the glycoprotein IIb/IIIa receptor binding, and provide fast and potent antiplatelet effects.9 A number of trials have shown that GPIs improve ischemic outcomes in patients with STEMI undergoing PPCI.9 However, most trials supporting such a benefit were conducted a number of years ago and their results do not translate to the current era of interventional pharmacology. In fact, the use of GPIs comes at the expense of an increased risk of major bleeding.9 The development of alternative treatment strategies with a more favorable safety profile has limited their use to mostly bailout (eg, no reflow or thrombotic complications) or very high thrombus burden scenarios.9 Administration of a GPI as a bolus only (without infusion) has emerged as a strategy to reduce the risk of bleeding.9

Cangrelor is an IV P2Y12 receptor inhibitor with prompt and potent antiplatelet effects.9 Cangrelor distinguishes itself from the GPIs not only for its therapeutic target, but also because of its very short half-life that allows a more rapid onset of action. In addition, unlike small-molecule GPIs, cangrelor is not affected by renal function and thus does not require dose adjustment in patients with kidney disease, which is often unknown at the time of presentation in patients with STEMI.3 These pharmacologic findings contribute to the reduction in peri-PCI thrombotic complications with an overall favorable safety profile (ie, bleeding) with the use of cangrelor.9 However, to date there are no direct head-to-head clinical comparisons between cangrelor and GPIs, and outcomes data related to cangrelor in STEMI are derived from subgroup analysis.9 Cangrelor should be administered as a bolus followed by at least a 2-hour infusion after PCI. Given the presence of a drug-drug interaction when transitioning from cangrelor to a thienopyridine (clopidogrel or prasugrel), these should be administered only at the end of cangrelor infusion; on the contrary, ticagrelor can be administered at any time without any interaction.10

Oral antithrombotic therapies are key for the acute and long-term treatment of patients with STEMI.3,4 The use of aspirin in combination with a P2Y12 receptor antagonist is known as dual antiplatelet therapy (DAPT) and is the standard of care after PPCI.11 Aspirin is an established first-line therapy in patients with STEMI and should be administered promptly. A loading dose of an oral P2Y12 inhibitor can be administered at the time of presentation or at the time of PCI.3,4 However, data have not shown any ischemic benefit with upstream P2Y12 inhibitor treatment, likely due the limited time frame between clinical presentation and the start of PPCI.3,11 Clopidogrel is the most commonly used P2Y12 inhibitor. However, it is characterized by a slow onset of action and broad interpatient variability in antiplatelet effects.12 Prasugrel and ticagrelor are characterized by more prompt, potent, and predictable antiplatelet effects and have been shown to be superior to clopidogrel in reducing ischemic events. Although they are associated with an increased risk of bleeding, the net clinical benefit still favor prasugrel and ticagrelor over clopidogrel. Accordingly, in the absence of contraindications, prasugrel and ticagrelor are the preferred P2Y12 inhibitors in PPCI.3,4,11 However, recent evidence indicates that although prasugrel and ticagrelor are characterized by relatively prompt antiplatelet effects, in the setting of STEMI, the onset of their effects is delayed and several hours may be required to reach therapeutic levels.3 This may be attributed to impaired gastrointestinal absorption in STEMI, a phenomena that can be exacerbated by the use of opioids commonly administered in this setting. This underscores the need for strategies that can either enhance drug absorption or bridge the gap in platelet inhibition. Crushing tablets of P2Y12 inhibitors has been shown to be effective to enhance drug absorption.13,14 Use of IV antiplatelet therapies is the most effective way of bridging the gap in platelet inhibition.15,16

The optimal duration of DAPT after PPCI has been the subject of controversy. Guidelines recommend that DAPT should be maintained for at least 12 months.11 However, shorter durations (eg, 6 months) may be considered in patients at increased risk of bleeding. Prolonging DAPT beyond 12 months may further reduce the risk of ischemic events, albeit at the expense of increased bleeding. However, most recent guidelines endorse prolonging DAPT beyond 12 months in patients deemed to be at high ischemic risk and at low bleeding potential.17 An alternative strategy for the prevention of ischemic recurrences beyond 12 months is with the use of the oral factor Xa inhibitor rivaroxaban at a vascular dose regimen as an adjunct to aspirin, a strategy known as dual pathway inhibition.18

Several anticoagulant and antiplatelet agents with different safety and efficacy profiles are currently available for the treatment of STEMI patients undergoing PPCI. The choice of the agents should take into consideration the thrombotic and bleeding risk of the individual patient (Figure 2). Economic and local health care systems may impact the choice of therapies. Ongoing research in the field will provide further insights on the most cost-effective antithrombotic approaches after PPCI. 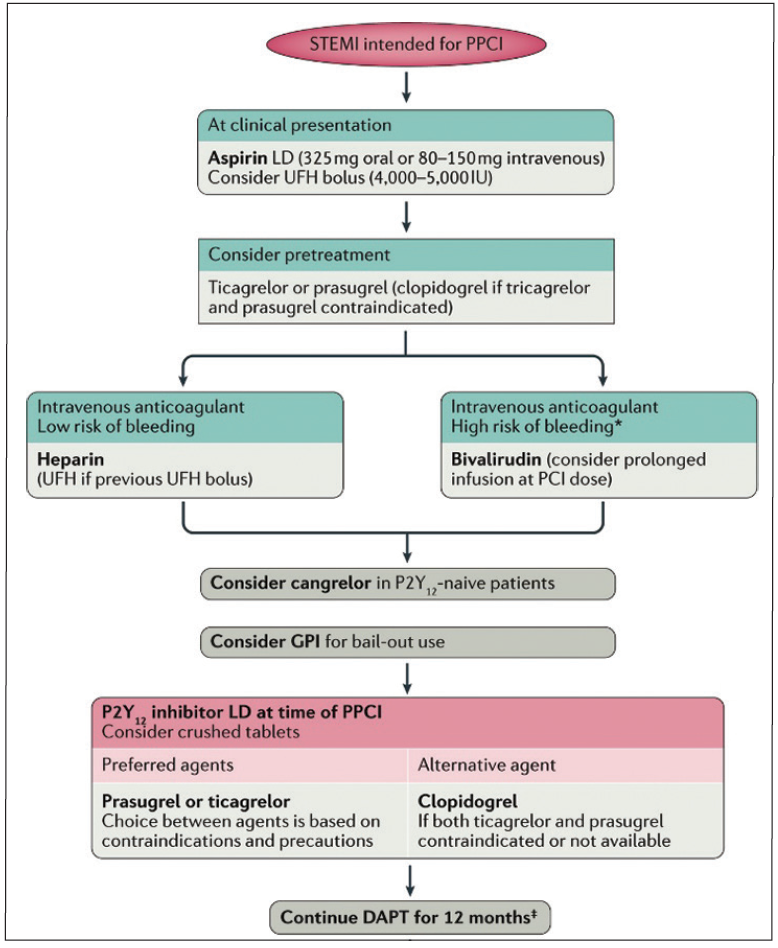 6. Angiolillo DJ. The evolution of antiplatelet therapy in the treatment of acute coronary syndromes: from aspirin to the present day. Drugs. 2012;72:2087-2116.

15. Valgimigli M, Tebaldi M, Campo G, et al. Prasugrel versus tirofiban bolus with or without short post-bolus infusion with or without concomitant prasugrel administration in patients with myocardial infarction undergoing coronary stenting: the FABOLUS PRO (Facilitation through Aggrastat By drOpping or shortening Infusion Line in patients with ST-segment elevation myocardial infarction compared to or on top of PRasugrel given at loading dOse) trial. JACC Cardiovasc Interv. 2012;5:268-277.