Available data suggest that CR, potentially in a single setting as opposed to a staged procedure, has advantages, especially for patients with MVD. These advantages include: 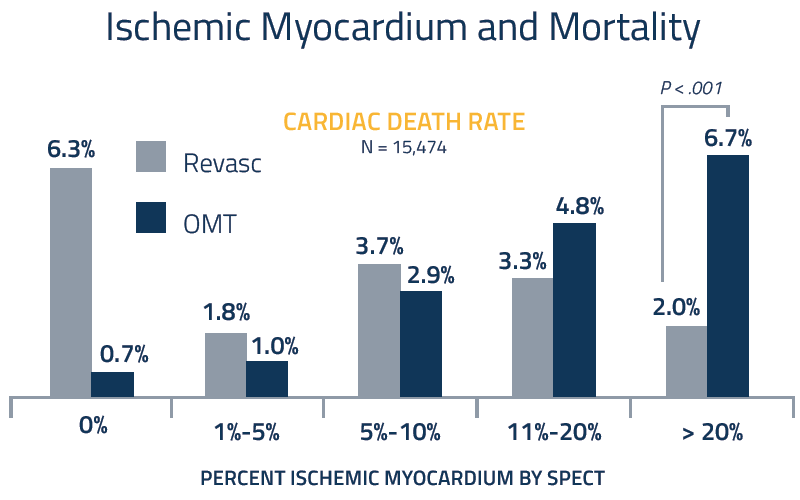 Figure 1. Mortality progressively increased in medically treated cases but not in those managed with revascularization. OMT, optimal medical therapy

The SYNTAX trial4 randomized patients with coronary artery disease to revascularization with PCI or CABG. In the PCI group, cardiac death was lower when CR was achieved (6% with CR vs 9.1% with IR; P = .049), with a trend toward all-cause mortality (11.9% vs 15.9%; P = .052). Cardiac death and all-cause mortality were also significantly lower among CABG group patients who received CR. In the Mayo Clinic PCI Registry, a cohort of 5,350 patients presenting with MVD who underwent PCI (either with bare-metal or drug-eluting stents), CR was associated with a survival benefit. In fact, the best survival was noted in patients without diabetes undergoing CR. The poorest survival was in diabetic patients who underwent IR.6

Although the primary endpoint in this study was mortality, an improvement in LVEF was also experienced by the majority of patients (Figure 3). The extent of coronary revascularization correlated with both LVEF recovery and survival. 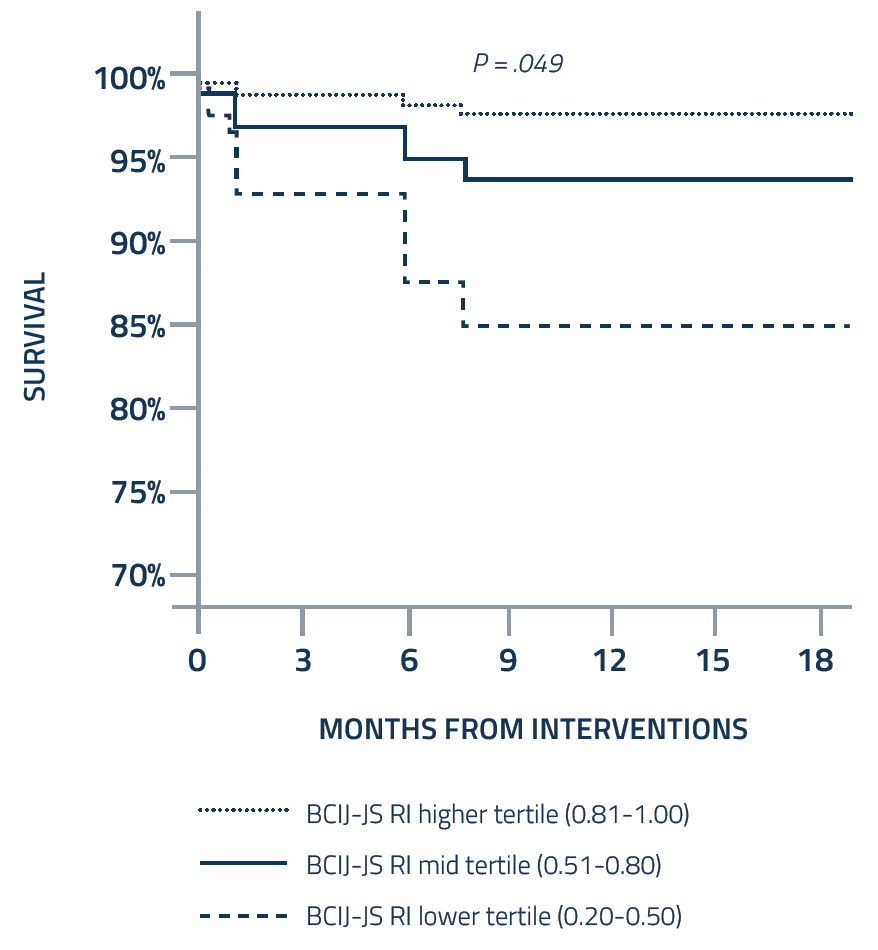 Figure 2. Survival curves according to extent of revascularization. 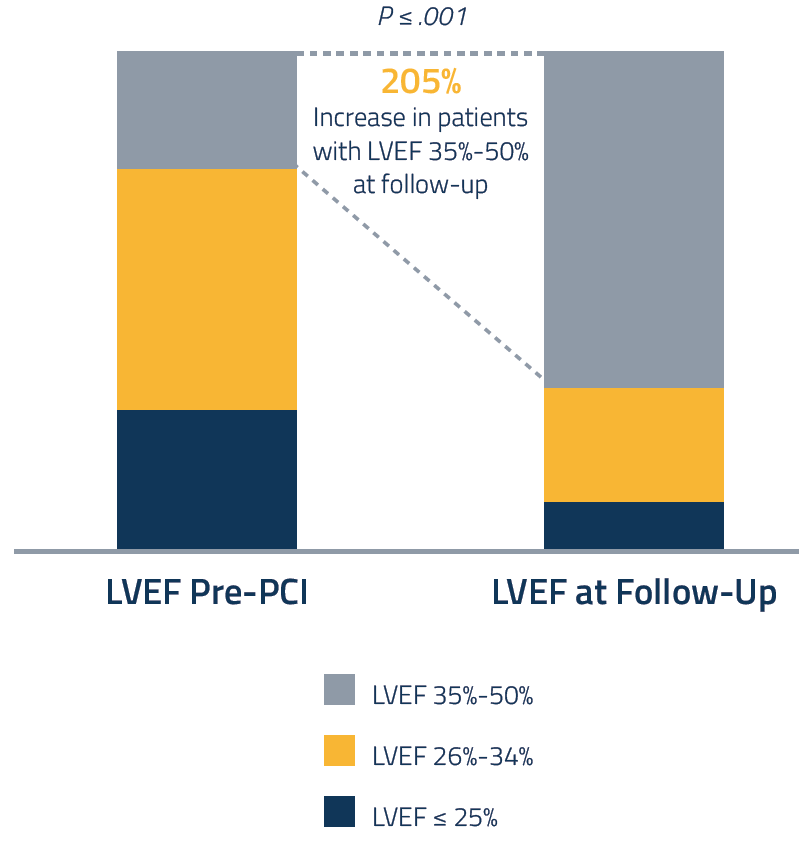 A prospective, observational, multicenter registry analysis (and the largest study of its kind) showed that single-stage CR improved long-term survival in patients with non–ST-segment elevation myocardial infarction (NSTEMI) and MVD. Outcomes from 19,980 patients, of which roughly half underwent single-stage acute CR during PCI, were compared with a propensity-matched group undergoing revascularization of only the implicated (culprit) vessel. Patients who underwent single-stage CR experienced a 5-year survival advantage for all-cause mortality (P = .0001) (Figure 4).9 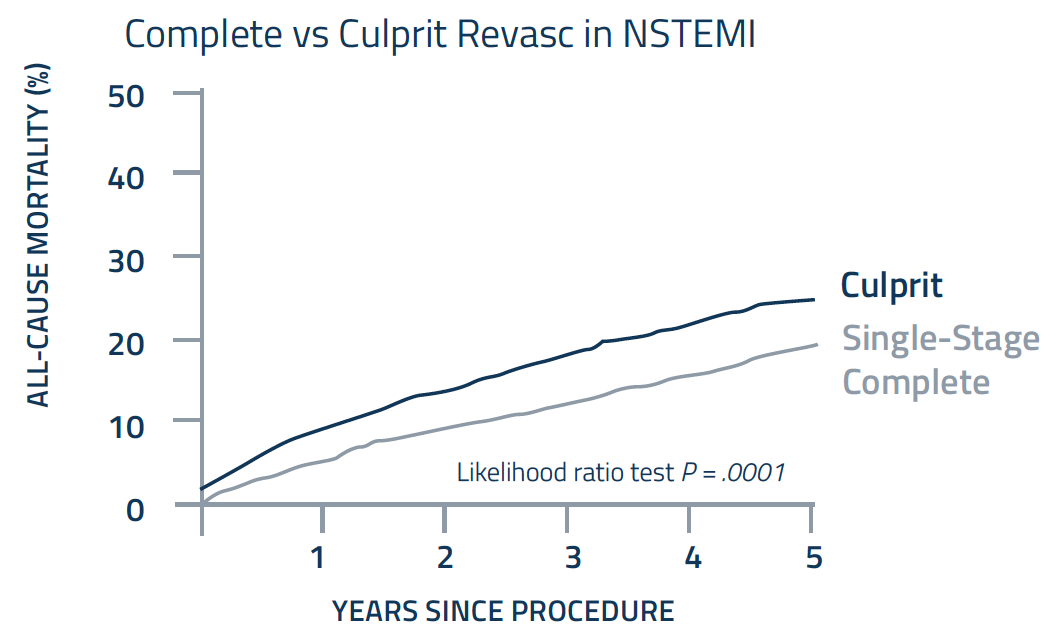 Because CR in a single setting often requires longer procedure times and larger amounts of contrast, acute kidney injury (AKI) is a concern. Studies have shown that patients with AKI after PCI have higher in-hospital mortality rates.12 A retrospective single-center study of PCI with Impella support during high-risk PCI found that mechanical circulatory support reduced the overall AKI risk, even in those cases in which there was preexisting chronic kidney disease.6

Furthermore, treatment of MVD in a single setting may induce hemodynamic instability that can be mitigated with the Impella heart pump. Impella has demonstrated positive patient outcomes in several clinical studies and postmarket registries.13-15

CR leads to improved outcomes in terms of mortality, MI, repeat revascularization, and MACCE rates. Perhaps more controversial is the view that single-stage CR in patients with MVD is associated with better outcomes in MACCE and revascularization rates when compared with multistage PCI. Interventional cardiologists should consider achieving CR in a single setting based on a growing data set that CR has clinical advantages for patients with MVD.