Aortic insufficiency (AI) is the diastolic reflux of blood from the aorta into the left ventricle due to failure of coaptation of the aortic valve leaflets. AI often mandates surgical aortic valve replacement (SAVR) when symptomatic and is associated with decreased ventricular function or increased ventricular dimensions. Transcatheter technologies originally developed for aortic stenosis (AS) have now been applied to patients with AI; however, outcomes have been variable, with ongoing issues such as proper sizing, device embolization and migration, residual regurgitation, and new-onset conduction abnormalities. In this article, we review the technical aspects, current limitations, and future direction of transcatheter aortic valve replacement (TAVR) in AI, excluding analyses of valve-in-valve TAVR for bioprosthetic AI and, rather, focusing on native valve aortic regurgitation.

Unlike AS from degenerative calcific disease, AI has multiple etiologies. Pathophysiology leading to AI can originate at the leaflet level (calcified/myxomatous/bicuspid leaflets, endocarditis, rheumatic disease), the root level (dilation from dissection/trauma/arteritides/viruses), or the tissue level. Root dilation has surpassed leaflet pathology as the most common reason for SAVR for AI.1 In the population-based Framingham Heart study, the prevalence of moderate or greater AI in patients aged 70 to 83 years was 2.2% in men and 2.3% in women.2 Left untreated, symptomatic patients have a reported mortality rate as high as 10% to 20% per year.3

Although symptoms differ based on chronicity, patients with AI can experience heart failure, palpitations, and angina and may present with a widened pulse pressure and diastolic murmur.1 Transthoracic echocardiography (TTE) is the gold standard of diagnostic workup.1 Moderate or greater AI is defined on TTE by a jet width ≥ 25% of the left ventricular (LV) outflow tract, a vena contracta ≥ 0.3 cm, a regurgitant volume ≥ 30 mL/beat, a regurgitant fraction ≥ 30%, and a regurgitant orifice area ≥ 0.10 cm2.1

Surgical candidates with symptoms, an LV ejection fraction ≤ 50%, an LV end-systolic diameter > 50 mm, or an LV end-diastolic diameter > 65 mm have historically been recommended for SAVR or repair.1,3 However, even with a prominent disease burden, 7.8% of patients with severe AI who should be operated on are not because of high mortality risk.2,4,5 TAVR can be used in these inoperable patients.

OUTCOMES OF TAVR IN AI

Originally approved for severe AS, TAVR is a less invasive alternative for treating aortic valve pathology that relies on the calcified annulus and leaflets of the native valve to provide an anchor for the transcatheter prosthesis.6 With the expansion of TAVR beyond its original indication, clinicians are beginning to investigate its use in native AI. Initial testing with first-generation TAVR devices had suboptimal results that have improved with time.

The largest systematic review and meta-analysis on TAVR in AI included 19 studies and 998 patients. Overall mortality at 30 days was 11.9%, but there was a statistically significant reduction in mortality when comparing new-generation devices with old-generation devices (9.1% vs 15.3%; P = .02) (Table 1).7-10 Although composite 1-year mortality was approximately 25%, one study quoted a 1-year mortality for untreated patients with severe AI at 40%.7 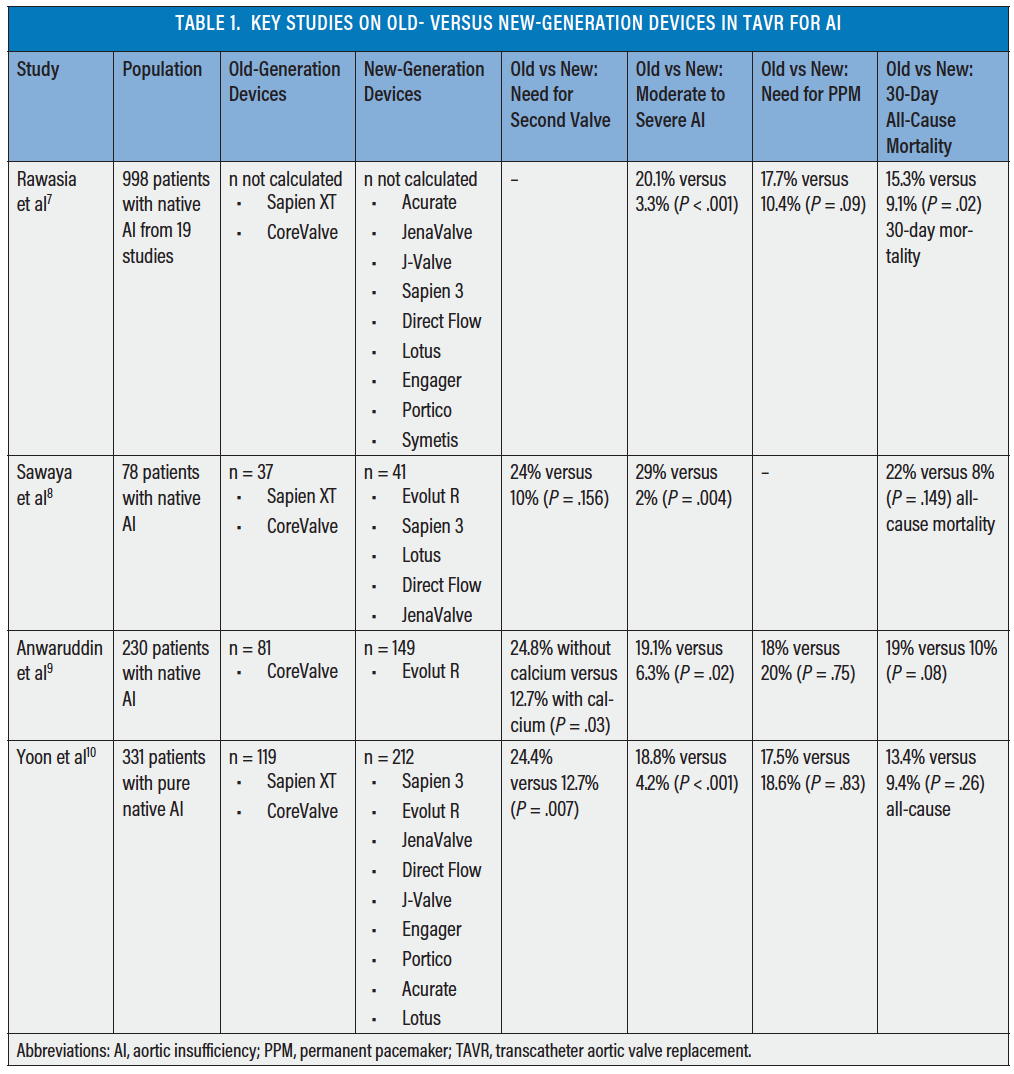 TAVR in AI comes with a unique set of challenges, and limitations occur due to lack of sufficient anchoring, risk of embolization/migration, paravalvular leak (PVL)/residual AI, and conduction abnormalities.7,8

LIMITATIONS OF TAVR IN AI

With associated root dilation, aortic valve annular dimensions in a patient with AI may exceed those recommended by manufacturers of commercially available TAVR valves.7 More than 75% of patients in the Society of Thoracic Surgeons (STS)/American College of Cardiology (ACC) TVT registry who were treated for severe native AI with a self-expanding valve required a valve ≥ 29 mm; however, 34-mm valves were not added to the registry until later.9 In Sawaya et al, 78 patients from 18 centers underwent TAVR for pure severe AI; valves were oversized by 10% to 25% of the largest annular diameter in systole.8 All patients survived the procedure, 97% had successful deployment, and 86% had no postprocedural moderate or severe AI.8 Almost half of the valves used in the study were CoreValves (Medtronic), with the idea that oversizing with a self-expanding valve would be less likely to result in annular rupture than a balloon-expanding valve. However, Roy et al reported implantation of a second valve due to malposition in 18.6% of CoreValves used for AI, which was caused by insufficient anchoring with the prosthesis.11

Oversizing in TAVR for pure AI is performed to minimize the risk of embolization/migration.12 In Yoon et al, 331 patients underwent TAVR for AI, and a statistically significant need for a second valve was shown in larger annuli (≥ 25.2 mm) due to device malposition.10 Aside from providing an anchor for the TAVR valve in AS, calcium is a reliable fiducial marker on fluoroscopy during valve implantation that is lacking in AI.11 In Sawaya et al, the 16.7% of patients who required a second TAVR valve for pure native AI was because of embolization or deep implantation of the first valve.8 Device placement can be difficult with increased stroke volume and a hypercontractile left ventricle in AI.6 In the STS/ACC TVT registry, the percentage of the 109 patients without calcium who needed more than one self-expanding TAVR valve was almost twice as much as in the 118 patients with some annular calcium (24.8% vs 12.7%; P = .03).9

Device migration was also prominent in Yehya et al; nine patients with continuous-flow LV assist devices (CF-LVADs) underwent TAVR for AI, and 22% of patients required a second implant.13,14 Instead of a modified Park stitch, patch closure, SAVR, or Amplatzer device (Abbott), TAVR can be used in CF-LVAD patients with AI from static flow and altered hemodynamics (Figure 1). Concomitant treatment of existing greater than mild AI is recommended at the time of CF-LVAD placement and postimplantation; untreated AI will dampen device performance.13,14 In these extreme-risk surgical patients, a less invasive method of treatment is preferred. The results of Yehya et al were promising, with a decrease in AI to none/trace in all nine participants (Figure 2), 100% survival to discharge, and 89% survival at 6 months.13,14 However, along with migration, bleeding-related complications also occurred. One-third of patients had access site/vascular complications, and although not existent in this study, TAVR thrombosis for AI in CF-LVAD has been reported.13-15 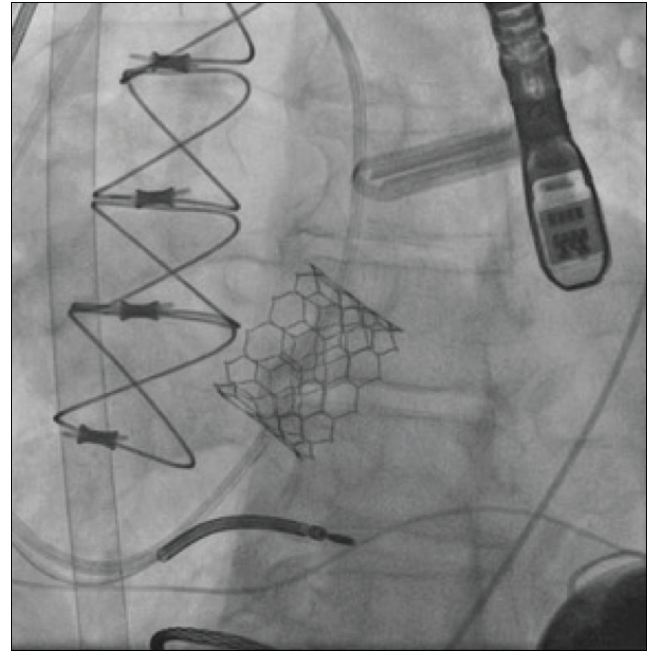 Figure 1. Angiography of a CF-LVAD patient who received a balloon-expandable valve for AI. 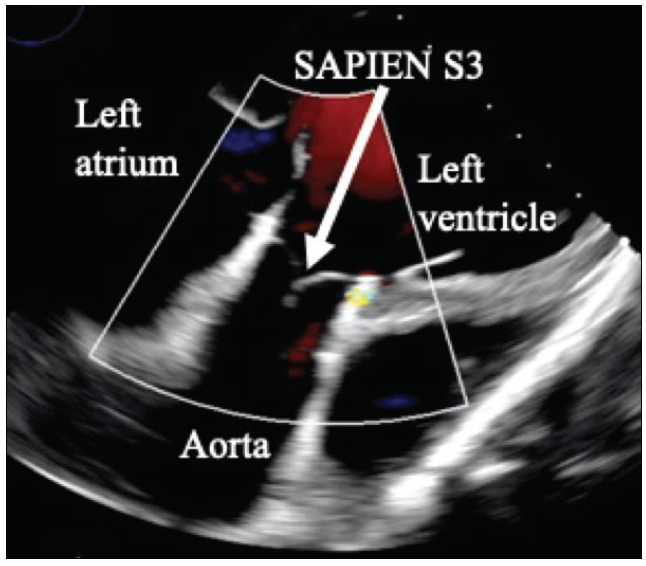 The success (as defined by Valve Academic Research Consortium-2 criteria) of new-generation devices in an analysis by Sawaya et al was mainly because 98% of patients lacked moderate or severe AI (P = .004).8 This is consistent with data from Anwaruddin et al, which showed a reduction in moderate or severe AI from 19.1% to 6.3% (P = .02) among the 81 patients who received a CoreValve versus the newer Evolut R.9 With eight additional valve types compared with Anwaruddin, the results of Yoon et al demonstrated 18.8% of early generation device patients having moderate or greater AI versus 4.2% with new-generation devices (P < .001).10

Similar to the outcomes of TAVR for AS, TAVR for AI results in a significant amount of postprocedural new left bundle branch block (LBBB) and need for permanent pacemaker (PPM). Sawaya et al found new LBBB to be a predictor of NYHA class III to IV heart failure after implantation (HR, 6.149; CI, 1.870–20.224; P = .003). In this study, 18% of patients with native AI required a PPM post-TAVR.8 Devices with grasping mechanisms that can decrease embolization have not been immune to the issue of conduction abnormalities; in the limited J-Valve prosthesis trial, 28.6% of patients had complete LBBB.17

Unlike other complications of TAVR in AI, the need for PPM has not improved with next-generation devices. Excluding patients with prior pacemakers, Yoon et al found no difference in need for PPM between subsequent iterations of devices when comparing early versus new generations (17.5% vs 18.6%; P = .83).10 Including patients with pacemakers, Anwaruddin found no difference in new PPM implantation between CoreValve and Evolut R recipients (17% vs 20%; P = .69).9 A systematic review and meta-analysis by Rawasia et al concurred, with a P value of 0.09 for PPM implantation between old- and new-generation devices.7

POTENTIAL SOLUTIONS TO TAVR IN AI

It has been consistently shown that old-generation TAVR valves in AI are associated with less device success and more embolization, migration, and residual AI.8,18 One reason for the success of newer devices is the development of purpose-specific TAVR valves for AI. Out of the new-generation devices used in Yoon’s study, JenaValve was implanted the most (30.2%).10

The JenaValve received European CE Mark approval for treatment of high- to prohibitive-risk patients with native AI and is placed via a transapical approach.8 JenaValve in native AI has been reported to have a 96.5% success rate, secondary to clip fixation of the native leaflets; however, the transapical approach has led to an increase in vascular/access complications and acute kidney injury.8 Currently, an early feasibility study of the transfemoral JenaValve system is underway in the United States. (NCT02732704).

Like the JenaValve, the J-Valve has graspers that fixate on the native leaflets. Angiography is used to place the nitinol frame, and in a limited trial with seven high-risk patients with pure AI, none of the patients had more than trace PVL at 30 days.17 The J-Valve has transitioned to transfemoral access; with this approach being the preferred route for TAVR implantation, all devices with grasping mechanisms should evolve to be placed via peripheral access.

Results have improved for TAVR in AI with use of new-generation devices—which have greater size variety, expanded adaptive seals, the ability to be repositioned/recaptured, and mechanisms to grasp native leaflets. New technology has addressed limitations from larger annular sizes secondary to aortopathies, embolization/migration from lack of calcium, and residual regurgitation due to difficult placement. In the Italian CoreValve registry, patients with AI were 9 years younger than patients with AS, on average, and had more class III or IV NYHA heart failure, increased pulmonary hypertension, lower device success, and higher mortality.8 Our goal is to treat these younger patients before irreversible LV dysfunction and pulmonary hypertension.12 Further studies on TAVR are needed in this challenging population to optimize outcomes before the sequelae of AI become irreversible.