A review of the approach to access placement, sheath options, and limitations of the technique.

Percutaneous techniques for the management of complex coronary artery disease have grown with the use of hemodynamic support to facilitate safe, durable, and complete revascularization. Hemodynamic support during high-risk percutaneous coronary intervention (PCI) with Impella (Abiomed, Inc.) requires large-bore arterial access that can be challenging in patients with peripheral artery disease. Alternative access sites and facilitated large-bore access techniques have been described to help overcome some of these limitations.1,2 Historically, two or three access sites have been necessary, one for the hemodynamic support device and a second (and possibly third) for guide catheter delivery. This can be challenging in patients with obstructive peripheral vascular disease with limited access options. In addition, increasing the number of access sites may potentially increase the risk of vascular access complications. Recently, a single-access technique has been described wherein the second access for guide catheter delivery is placed through the hemodynamic support sheath alongside the drive shaft of the Impella.3 Although the motor unit of the Impella requires a 14-F sheath, the 9-F drive shaft of the Impella leaves room within the sheath for a second sheath/catheter. Given the ease, safety, and efficiency of this technique, it is now the default access option for all patients undergoing Impella-supported high-risk PCI in many institutions. 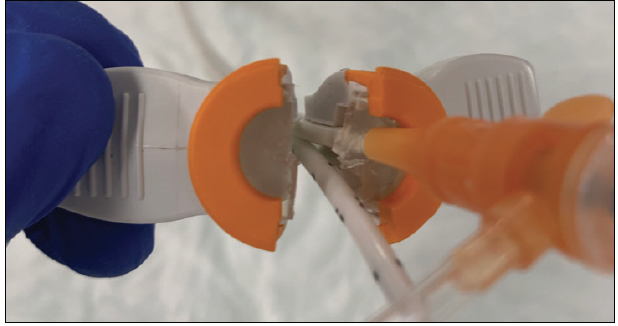 Figure 1. With the sheath peeled away, the separate access through the diaphragm is placed away from the Impella placement port to minimize sheath bleeding. 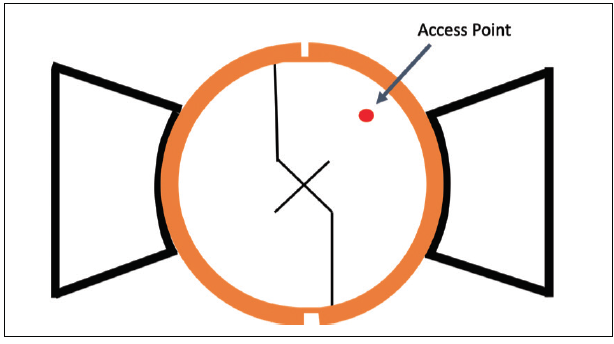 The access needle is advanced through the diaphragm (Figure 3) until blood returns, with care to ensure that the shaft of the Impella is not damaged. Once the diaphragm is punctured, a 0.035-inch wire is then introduced through the sheath; the stiff 0.035-inch wire that comes in the Impella CP works well for this step. An interventional sheath is then advanced over the wire through the diaphragm. Either the long or the short 14-F Impella sheath can be used for single access, with the long sheath typically used for patients with tortuous iliac anatomy. 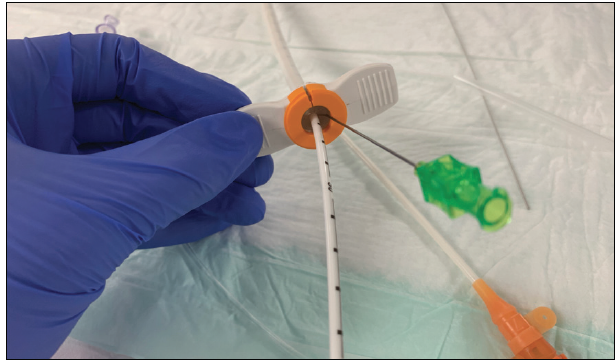 After PCI is completed, the guide catheter and sheath are removed from the Impella sheath by simply pulling them out. The diaphragm seals immediately and there is no bleeding.

Several types of sheaths have been used successfully with this technique. Sheath size is limited to 7 F, as larger sheaths are not compatible with the Impella shaft. Braided sheaths with an extended hydrophilic coating work well. Originally, a 6- or 7-F, 45-cm Pinnacle Destination sheath (Terumo Interventional Systems) with an extended hydrophilic coating (35 cm) was used, with the caveat that the last 10 cm of the sheath that is uncoated is difficult to advance through the diaphragm. The 6-F sheath can be advanced all the way to the hub of the Impella sheath, but the noncoated portion of the 7-F sheath has considerable resistance through the diaphragm and can only be advanced a few centimeters in. This leads to a portion of the sheath extending out from the Impella sheath (Figure 4). The shaft of the Impella should be fixed while advancing the sheath (particularly the nonhydrophilic-coated portion) to avoid inadvertent movement of the Impella. One advantage of longer sheaths is the lack of interaction with the Impella shaft when the guide catheter is advanced and manipulated. 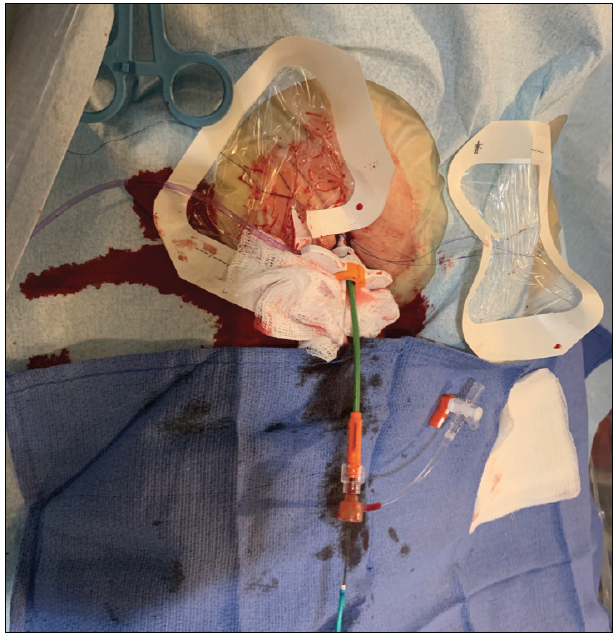 Standard 10- or 25-cm Pinnacle sheaths have also been used successfully. This sheath can be advanced all the way to the Impella sheath, although there is some resistance passing it (Figure 5). These sheaths may be beneficial in tall patients or those with tortuous anatomy to ensure the guide catheter can reach the coronary arteries. Manipulation of the guide catheter can be somewhat difficult with standard sheaths because the diaphragm can compress the sheath. Other sheaths have been used without success, including the 7-F Brite Tip sheath (Cordis, a Cardinal Health company), whereby the tip could not be advanced through the diaphragm, and the 7-F Flexor Raabe sheath (Cook Medical), which did not have a long enough hydrophilic coating, leaving an excessive amount of the sheath outside the body. Slender sheaths have been used with mixed success. These may not have enough radial strength, making guide catheter manipulation difficult. 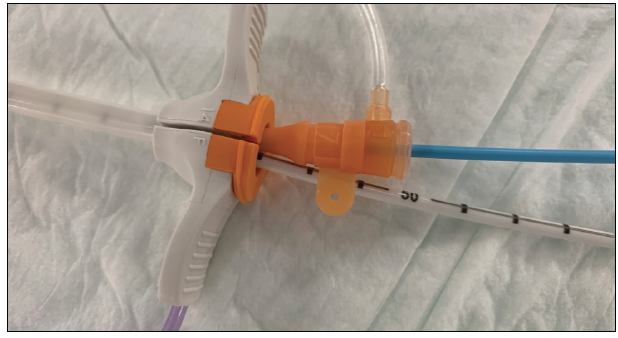 Figure 5. A 7-F standard sheath advanced all the way to the hub of the sheath.

There are potential complications and limitations with use of the single-access technique. The sheath/guide size is limited to 7 F, and larger-bore guide catheters require a second access site. A second access site is also required for a contralateral guide catheter for dual angiography and retrograde access in the case of chronic total occlusion intervention. Another potential limitation is reaching the coronaries with the guide catheter. The second access sheath often cannot be advanced to the hub of the Impella sheath, leaving some of the sheath outside of the body (Figure 4). If the patient is tall or has a tortuous aorta and/or iliac arteries, a standard 100-cm guide catheter may not reach the coronaries if a significant amount of the sheath is out of the body. Sheath and guide choices may need to be altered or a separate access for intervention may be necessary in these instances. Care must be made in gaining secondary access so that the shaft of the Impella is not inadvertently stuck with the access needle.

Bleeding from the diaphragm can also be an issue if this second access disrupts the diaphragm of the Impella insertion site. If this happens, removing the sheath and sticking at a separate site in the Impella sheath diaphragm may be necessary. Bleeding around the Impella sheath has been described. Tightening a preplaced Perclose ProGlide suture (Abbott) can potentially minimize bleeding if this occurs. Finally, the peel-away Impella sheath can be disrupted, which can lead to bleeding and necessitates removal of the peel-away sheath and advancing the repositioning sheath. A second access for coronary intervention would then need to be obtained.

The single-access technique also lacks a second access for management of access site complications. Typically, the arteriotomy is preclosed with one or two Perclose suture-mediated closure devices. At the end of the procedure, the sheath is then removed and the sutures are tightened on the arteriotomy. If access site complications occur, they can be managed from a secondary access site. A dry closure technique can also be used from a second access site. This is done by passing a balloon proximal to the arteriotomy and inflating it at low pressure during sheath removal and vessel closure to minimize bleeding. A modified version of this approach can still be accomplished with the single-access technique. Before removing the sheath, a peripheral angioplasty balloon sized 1:1 to the proximal vessel is placed through the Impella sheath over a 0.035-inch guidewire. This is placed in the vessel proximal to the arteriotomy and inflated at low pressure (2–4 atm). The inflated balloon limits bleeding as the sheath is then removed. The Perclose sutures are pulled down onto the arteriotomy but not tightened. The balloon is deflated to check for bleeding. The balloon and wire can then be removed if there is reasonable hemostasis, after which the sutures can be tightened and cut. If adequate hemostasis is not achieved, an additional closure device can be deployed over the wire or manual pressure can be performed.

The single-access technique represents a significant advance for Impella-supported high-risk PCI, eliminating the need for a second access site for PCI and decreasing the potential risk associated with multiple access sites. Although this technique is particularly beneficial in patients with limited access options, its ease and safety have made it the standard option for high-risk PCI access for many operators.