Why Do We Need the Door-to-Unload Trial for Anterior STEMI?

An opportunity to improve outcomes for millions of STEMI patients worldwide.

During ST-segment elevation myocardial infarction (STEMI), timing is everything. De Luca et al and Tarantini et al identified that every 30-minute delay in ischemic time, defined as symptom onset to reperfusion, is associated with a 7.5% increase in 1-year mortality and a nearly 30% increase in infarct size.1,2 Based on these observations, the American Heart Association’s Mission: Lifeline program successfully reduced in-hospital mortality among patients with STEMI and without cardiac arrest by reducing door-to-balloon (DTB) times between 2008 and 2012. Specifically, first door-to-device times for primary percutaneous coronary intervention (PCI) were reduced from 130 minutes to 112 minutes, rates of cardiogenic shock increased, and overall in-hospital mortality increased from 5.7% to 6.3%; but, adjusted mortality (excluding cardiac arrest patients) decreased by 25% (P < .001).3 However, in the modern era, a growing number of patients survive the STEMI incident only to develop heart failure and experience late-term mortality.

The association between heart failure and STEMI outcomes is well established.4-8 In 2011, Planer et al identified that a left ventricular end-diastolic pressure (LVEDP) > 24 mm Hg during PCI is associated with a nearly fivefold increase in mortality within the first 3 months after presenting with a STEMI compared with an LVEDP < 13 mm Hg.5 This observation was further validated by analyses of the SWEDEHEART study in 2015 and data from Olmsted County in 2016, which both showed that patients who develop heart failure during admission for acute myocardial infarction (AMI) have a significant increase in short- and long-term mortality compared with patients without heart failure during AMI.6,7 More recently, an analysis of more than 2,500 STEMI patients identified that despite successful and timely reperfusion, median infarct size after STEMI involves approximately 18% of total LV mass.8 This study further showed that every 5% increase in infarct size is associated with a 19% increase in 1-year all-cause mortality and a 20% increase in 1-year heart failure hospitalizations after STEMI. Collectively, these data suggest that in the era of low DTB times and low in-hospital mortality, there remains a significant need to improve patient outcomes by reducing the burden of heart failure during the acute and chronic phases after STEMI.

The use of mechanical circulatory support pumps as an approach to reduce infarct size began with preclinical studies in the late 1970s with the intra-aortic balloon pump, followed by left atrial–to–femoral artery bypass pumps and transvalvular pumps such as the Hemopump (Medtronic).13 Collectively, these studies identified that early use of support pumps before reperfusion can reduce infarct size. In 2013, using the TandemHeart percutaneous LV assist device (LivaNova), we showed that reducing cardiac workload (LV unloading) and delaying coronary reperfusion reduces infarct size by 50% in preclinical models of acute left anterior descending artery occlusion.14 Based on these preclinical data, the TRIS trial was launched but failed to enroll any patients due to the technical challenge of performing transseptal left atrial cannulation during an anterior STEMI. Around the same time, the CRISP AMI trial showed that initiating an intra-aortic balloon pump immediately before reperfusion failed to reduce infarct size in anterior STEMI.15

Pioneering work by Richard Smalling and Bart Meyns in the 1990s and 2000s showed that initiation of transvalvular axial flow pumps can reduce infarct size by attenuating reperfusion injury pathways.13 Since then, we and others have shown that activating an Impella CP device (Abiomed, Inc.) and delaying coronary reperfusion for up to 60 minutes reduces infarct size in preclinical models.13,16,17 Around the same time, the growing use and FDA approval of the Impella devices for high-risk coronary intervention and cardiogenic shock led to a global familiarity with the technology and a strong track record of safety during coronary intervention. Extensive preclinical data have identified that LV unloading reduces myocardial oxygen consumption, activates cardioprotective signaling programs in the heart, reduces myocardial ischemia by enhancing microcirculatory blood flow, and protects mitochondrial structural and functional integrity (Figure 1).13,16-18 Based on this mechanistic insight supporting the potential importance of LV unloading for some time before coronary reperfusion, the STEMI–Door-to-Unload (DTU) pilot trial was developed in coordination with the FDA to answer two important questions. First, is it feasible and safe to implant an Impella CP device during an anterior STEMI? Second, based on the canonical observations by De Luca and Tarantini, is the 30-minute delay to reperfusion necessary to reduce infarct size, and further, is this delay associated with increased infarct size?

Figure 1. The STEMI-DTU clinical research program. Timeline of studies leading up to the STEMI-DTU pilot trial.

To answer these questions, 50 anterior STEMI patients with a sum of precordial ST-segment elevation ≥ 4 mm were randomized to LV unloading followed by either immediate reperfusion (U-IR) or unloading followed by delayed reperfusion (U-DR) across 14 centers in the United States.19 Cardiac MRI at 3 to 5 days and 30 days showed no increase in infarct size in the U-DR group compared with the U-IR group, which was the first report to show that LV unloading may uncouple ischemic time from infarct size. Low rates of major adverse cardiovascular and cerebral events were observed at 30-day follow-up. The study also confirmed that it is feasible to consent patients for the trial and further showed 100% compliance with the 30 minutes of LV unloading before reperfusion across multiple sites and operators. Importantly, in the Supplemental Data section of the publication in Circulation, we reported that U-DR was associated with a statistically significant reduction in infarct size compared to U-IR among patients with large anterior STEMI, defined by a sum of ST-segment elevation > 6 mm (Figure 2).19 Successful completion of the STEMI-DTU pilot trial provided much-needed support for the development of a pivotal trial by confirming the feasibility and safety and by identifying potential benefit with LV unloading and U-DR as an approach to reduce infarct size in patients with anterior STEMI. 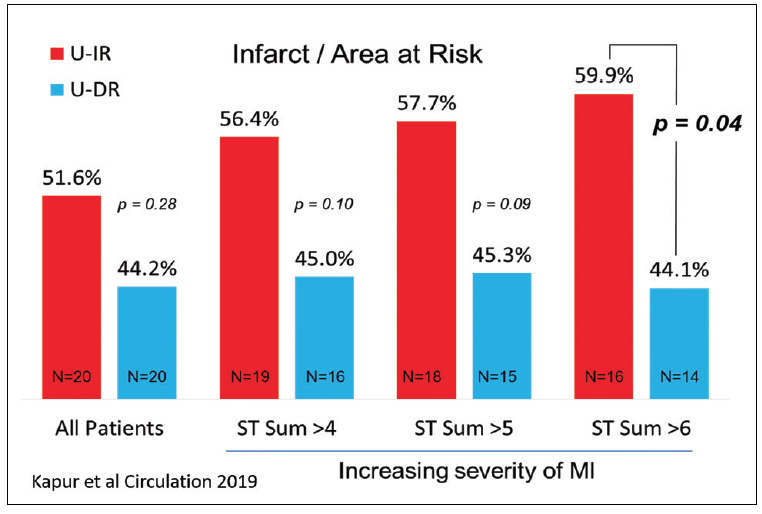 Figure 2. STEMI-DTU pilot trial results. Infarct size normalized to the area at risk using cardiac MRI 3 to 5 days after presentation with anterior STEMI grouped by the sum of precordial ST-segment elevations. Among patients with large anterior STEMI (sum ST-segment elevation > 6 mm), the U-DR strategy was associated with a significant reduction in infarct size compared with U-IR.

The STEMI-DTU pivotal trial will test the central hypothesis that compared with coronary reperfusion alone (DTB), a strategy of LV unloading for 30 minutes followed by coronary reperfusion (DTU) will reduce infarct size among patients with anterior STEMI.20 Specifically, the trial will enroll 668 patients randomized in a 1:1 fashion between DTB and DTU approaches. The primary endpoint of the trial is 30-day infarct size normalized to total LV mass, quantified by cardiac MRI. The study is powered for the primary endpoint and the combination of key secondary endpoints related to heart failure (Figure 3). The first patient was enrolled in December 2019.

If successful, completion of the STEMI-DTU pivotal trial could potentially revolutionize the care of STEMI patients by demonstrating that a strategy of first resting the heart and then opening a blocked artery is a superior strategy to limit myocardial damage and prevent subsequent heart failure. Furthermore, the trial would create a new window in time that allows for the delivery of adjunct pharmacotherapies during a period of LV unloading to further reduce infarct size and enhance myocardial recovery.

In interventional cardiology, it is often said that “better is the enemy of good;” however, when current therapy is insufficient and new approaches can be safely performed, it is our responsibility to explore whether better can be achieved for our patients. The STEMI-DTU pivotal trial represents an opportunity to improve outcomes for millions of STEMI patients worldwide.

Identifying the Right Mechanical Circulatory Support for the Right Patient

Identifying the Right Mechanical Circulatory Support for the Right Patient

PCI in Practice and Update on Mechanical Circulatory Support

Managing the Shift to Elective PCI in the ASC Setting

Making Sense of ORBITA and ISCHEMIA