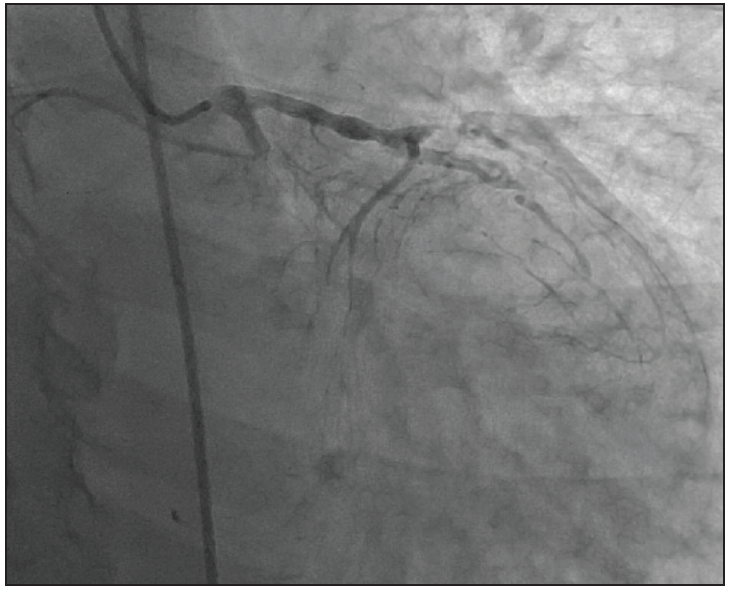 An Impella CP device (Abiomed, Inc.) was placed for circulatory support and the patient had successful revascularization of the culprit mid–left circumflex artery with use of a drug-eluting stent. The next day, the Impella CP device was removed after initiation of low-dose vasopressin and dobutamine. Over the next 72 hours, the patient was unable to be weaned from dobutamine. Therefore, a PA catheter was placed with the following hemodynamics: blood pressure, 96/62 mm Hg; heart rate, 95 beats per minute; RA, 5 mm Hg; PA, 50/26, 34 mm Hg; PCWP, 23 mm Hg with a large V wave; and cardiac index of 1.9 L/min/m2. Echocardiography was performed and yielded the following findings: left ventricular ejection fraction (LVEF), 35%; inferior inferolateral wall akinesis; a small region of apical akinesis; left ventricular internal diastolic diameter, 5.9 cm; posterior mitral leaflet tethering with severe mitral regurgitation (MR), normal right ventricular size and function, and trace tricuspid regurgitation.

The patient had now been hospitalized for 1 week and was inotrope dependent. He wanted to pursue all options to maximize his quality of life and longevity.

Do you believe the occluded LAD artery is contributed to his inotrope dependence/low output state? What further testing, if any, would help you decide, and would you consider revascularization?

Dr. Jermyn: I do believe this picture of cardiogenic shock may, in part, be related to ongoing ischemia. The patient had a STEMI with a large troponin leak, which is usually a sign that there is active ischemia coming from all infarcted myocardium, rather than cardiogenic shock. Often, a positron emission tomography viability or MRI viability study can help discern if there is territory that would benefit from revascularization. In this case, even if the patient was too unstable to be sent for imaging, I would consider percutaneous coronary intervention (PCI) of his LAD empirically.

Dr. Shah: CTO is frequently present among patients presenting with STEMI complicated by cardiogenic shock and multivessel coronary artery disease. In previous studies, the presence of a CTO has been associated with adverse clinical outcomes. It has been well established that, despite extensive collateral formation, myocardium within the territory of a chronically occluded coronary artery is at high risk for ischemic injury, which is very likely exacerbated in the setting of cardiogenic shock/low output state, as well as intravenous inotropes due to increased myocardial oxygen demand. In this situation, early use of mechanical circulatory support devices such as the Impella or a balloon pump can help reduce myocardial oxygen demand, lower inotrope requirement, and reduce myocardial injury. After culprit vessel revascularization and persistent shock, a combination of maintaining a PA catheter while on mechanical circulatory support, monitoring in the cardiac intensive care unit, and using serial transthoracic echocardiography is usually adequate in monitoring the patient’s progress.

Although several recent randomized controlled trials have shown that complete revascularization after STEMI offers some advantages over culprit vessel PCI only, these studies did not mandate PCI in CTO and excluded patients in cardiogenic shock. The CULPRIT-SHOCK trial randomized patients presenting with acute coronary syndrome complicated by cardiogenic shock with an identifiable culprit lesion and multivessel disease.1 At 30 days, there was an approximate 10% absolute reduction in the rate of death or renal replacement therapy among patients who underwent immediate culprit lesion revascularization with the option of staging nonculprit lesions (including CTOs) when compared with immediate multivessel PCI.

I would consider acute revascularization of the CTO in the setting of shock, preferably while the patient is maintained on mechanical support, such as Impella. This requires the expertise of an experienced complex coronary interventionalist and could offer benefit when the patient’s clinical status continues to deteriorate despite culprit vessel revascularization and cardiac support, there is continued evidence for myocardial ischemia, or the patient cannot be weaned off inotropes and/or mechanical support. Otherwise, I would consider staged revascularization for CTO once the patient is stable off of inotropes and mechanical circulatory support, started on guideline-directed medical therapies, and has stable renal function but symptoms of either angina or dyspnea with exertion that could be attributed to the chronic lesion.

Dr. Garan: This lesion may be playing a role in the patient’s on-going shock state. Observational data have demonstrated that the presence of a CTO of a nonculprit vessel in the setting of acute myocardial infarction portends a poor prognosis.2 However, randomized trials and meta-analyses have not supported improvements in outcomes when these lesions are routinely revascularized in the acute setting.3 It would be helpful to understand the physiologic significance of the lesion with perfusion imaging, but in the early postinfarct period, the accuracy of noninvasive perfusion imaging is diminished. In the absence of akinesia on an echocardiogram corresponding to this territory, I would still consider revascularization to improve the patient’s chances of recovering from the shock state.

Based on the hemodynamics and echocardiogram, can you determine whether the MR is contributing to his low output state?

Dr. Shah: After initial revascularization of the culprit artery and Impella placement, the patient was successfully weaned from dobutamine but had a reduced LVEF of 35%, inferolateral and apical wall motion abnormality, significantly elevated wedge pressure, large V waves from severe ischemic MR, and a low calculated cardiac index. In this situation, I would confirm the position of the Impella and reassess the wedge pressure and severity of MR under maximum Impella support. The Impella CP or Impella 5.0 devices are more appropriate in the setting of cardiogenic shock and can provide up to 4 L/min and 5 L/min of cardiac output support, respectively. If the highest levels of Impella support are unable to lower the wedge pressure or reduce MR severity and the overall cardiac output does not improve, I would argue that the MR is contributing to the persistent low output state.

Dr. Garan: The fact that the right ventricle appears normal suggests that this is not a chronic problem but is instead an acute sequela of the infarct that the patient sustained. The large V wave also suggests a noncompliant left atrium that is not accustomed to chronic volume loading (ie, the MR being an acute problem). An LVEF of 35% alone would be somewhat surprising to result in hemodynamics consistent with cardiogenic shock, but in the setting of the severe MR, an ejection fraction of 35% indicates more severe left ventricular dysfunction as a result of the MI. Therefore, this valvular lesion is likely to be playing a role in the patient’s shock state.

Dr. Jermyn: Because it is highly probable that his culprit artery was a wraparound LAD lesion, the MR may very well be ischemic. The posterior-medial papillary muscle is served by the LAD and circumflex arteries; therefore, given his anatomy, it is possible that the posterior-medial papillary muscle was the underlying mechanism of the MR seen on echocardiography. Oftentimes, in cases in which MR is ischemic and not functional, the ventricle will still be normal in size.

Dr. Garan: With an LVEF of 35% and hemodynamics consistent with cardiogenic shock, surgical mitral valve intervention is high risk and the patient may be difficult to wean from cardiopulmonary bypass. Given his age, hemodynamics, and immobility as a result of his critical illness, durable LVAD implantation would also be a high risk. The best option for this patient is likely percutaneous mitral valve repair if this is technically feasible. This will likely improve his hemodynamics and may facilitate his wean from inotropic support. If he is left with severe symptomatic heart failure, even after this procedure and medical optimization of his heart failure, both surgical mitral intervention and LVAD options may be considered in the future if he can regain some functionality before any surgical intervention.

Dr. Jermyn: First, I would consider revascularizing the LAD and circumflex arteries and then reevaluating the degree of MR. If it remained severe, then a mitral valve clip could be pursued. All options should be exhausted before considering LVAD.

Dr. Shah: In cases of ischemic MR from inferolateral wall motion abnormality and leaflet tethering in acute myocardial infarction, coronary artery revascularization can lead to resolution of MR while the patient is stabilized on medical therapy and/or mechanical circulatory support during the acute episode. Because the described patient remains dependent on inotropes without evidence of resolved ischemic MR, further intervention will depend on the exact etiology for MR, patient-physician discussion, and center experience.

The best way to move forward would be a heart team discussion involving multidisciplinary care providers, including a cardiac intensivist, cardiothoracic surgeon, structural interventional cardiologist, valvular experts, and heart failure providers. The role of oral medical therapy or cardiac resynchronization therapy is limited here. The choice comes down to mitral valve intervention and/or LVAD placement, and evidence remains scarce on the optimal treatment for ischemic MR in such a complex patient.

If the surgical risk is reasonable, the patient could undergo either mitral ring annuloplasty or mitral valve replacement via a chordal-sparing procedure—although MR recurrence is common with the former strategy, and surgical morbidity and mortality remain significant with both strategies. Safety and efficacy data for an alternative, less invasive transcatheter strategy via edge-to-edge mitral valve repair seem to be accumulating rapidly, particularly as centers gain more experience and expertise after recent FDA approval for use in functional MR. Transcatheter mitral valve replacement has also demonstrated excellent early safety data with immediate reduction in MR severity. However, such therapies are currently only available at large centers because expertise is limited. Implanting a continuous-flow LVAD can produce significant decompression of the left ventricle in patients with end-stage heart failure and ameliorate MR severity. However, in patients with “disproportionately severe” MR, significant residual MR may persist despite LVAD implantation. Hence, an LVAD implantation strategy may require additional mitral valve repair or replacement on an individual case basis. 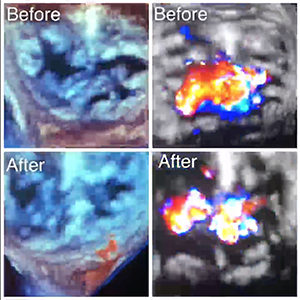 APPROACH OF THE MODERATOR

Although the patient was active prior to the event, he appeared frail after > 1 week of being bedbound. Therefore, our a priori principle was to avoid surgical intervention if possible. We believed there was a disconnect between his degree of left ventricular dysfunction and hemodynamics, which were best explained by the MR. In consultation with our structural heart team, we decided to proceed with a mitral valve clip (MitraClip, Abbott) to reduce MR. Additionally, to offer the best chance of recovery, we chose to revascularize the LAD artery percutaneously prior to the mitral clip. Both procedures were performed without complication 72 hours apart, and the patient was successfully weaned from inotropes. At 3-month follow-up, he is tolerating low-dose neurohormonal modulation and rehabilitating well.