Considerations for this minimally invasive approach to treating patients with failed bioprostheses.

An aging population and significant increase in the use of bioprosthetic tissue valves will no doubt contribute to a large population of patients with degenerated tissue valves. Patients who have failed bioprosthetic valves are usually at increased risk for open heart surgery. These patients are increasingly referred for aortic valve-in-valve (ViV) transcatheter aortic valve replacement (TAVR) procedures. Clinical data show that aortic ViV procedures are safe and effective1; however, there are two meaningful adverse events that still deserve careful consideration. The first is coronary obstruction, which is a life-threatening complication of ViV that occurs in approximately 2% to 3% of cases, and the second is residual stenosis, which is a relatively common adverse event that may reduce the efficacy of the procedure (Figure 1).2,3 Furthermore, elevated postprocedural gradients are considered the Achilles heel of aortic ViV. 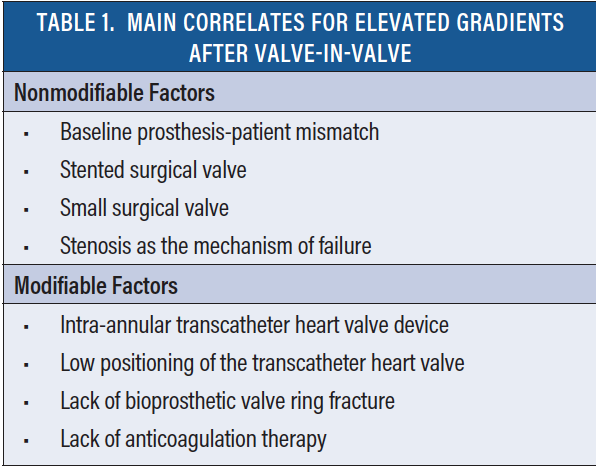 This article focuses on hemodynamics after ViV procedures and describes strategies that may enable optimal valve function in these increasingly performed procedures (Table 1).

PROSTHESIS-PATIENT MISMATCH OF THE SURGICAL VALVE

Small label size of the surgical valve is associated with inferior results after ViV procedures. Data from the VIVID registry show that patients with bioprosthetic valves with a label size of 21 mm and smaller had higher mortality rates than those with larger surgical valves.1 In addition, patients with small surgical valves undergoing ViV display much higher postprocedural gradients and inferior recovery after surgery. Preexisting prosthesis-patient mismatch (PPM) is a major contributor to these worse clinical outcomes. In these conditions, the implanted valve, when fully expanded, enables too small of an effective orifice area in relation to the patient’s body size. A more recent analysis showed that preexistent severe PPM of the surgical valve is the main correlate of elevated postprocedural gradients, as well as short- and long-term mortality after ViV.4 This is clearly a strong argument for preventing PPM during the original implantation of bioprosthetic valves. It is also suggestive that the existence of bioprosthetic valve PPM should be part of the ViV assessment and would influence the decision to perform the ViV procedure, the type of transcatheter valve to be used, and the method of implantation.

Residual stenosis after ViV is commonly the result of the nondistensible characteristics of bioprosthesis stent rings, often resulting in underexpansion of the transcatheter valve implants. That underexpansion is commonly revealed by the elevated postprocedural gradients. The mean gradient after aortic ViV is commonly 15 to 20 mm Hg, which is significantly higher than the common gradients seen after native aortic valve TAVR (10 mm Hg).1,2,5 Some registries that utilized core lab echocardiographic adjudication revealed an average mean gradient of 13 to 20 mm Hg after ViV.2,5,6 The mean gradient after aortic ViV in the VIVID registry was 15.8 ± 8.9 mm Hg.1 Similarly, data from the TVT registry on aortic ViV procedures reveal an average mean gradient of 16 mm Hg after the procedure.7

The proportion of patients with high postprocedural gradients (mean gradient ≥ 20 mm Hg) was greater in the severe PPM group than in those without severe PPM (47.5% vs 29.6%; P = .001).4 The risk of elevated postprocedural gradients was higher in those treated with balloon-expandable valves (35.3% vs 25.1%; P < .001) and was especially high when balloon-expandable transcatheter heart valves (THVs) were deployed in surgical valves that had severe PPM (78.3% vs 33.9%;
P < .001).4

Data from the PARTNER trial evaluating ViV with the Sapien XT valve (Edwards Lifesciences) showed an average mean gradient of 17.6 mm Hg after the procedure, with elevated postprocedural gradients (mean ≥ 20 mm Hg) in 34.3% of patients.2 Interestingly, patients with elevated postprocedural gradients had a higher mortality rate within 1 year after the procedure (16.7% vs 7.7%; P = .01). Although the pivotal study of the CoreValve device (Medtronic) showed a mean gradient of 17 mm Hg after ViV,5 a more contemporary European registry of ViV procedures, mainly using the CoreValve Evolut device (Medtronic), included meticulous technique of high device positioning and showed better hemodynamic results, with an average mean gradient of 12.2 mm Hg.6 A matched comparison of THV devices utilized in ViV procedures revealed that the Portico valve (Abbott Vascular) was associated with higher gradients in ViV procedures than CoreValve Evolut (17 ± 7.5 mm Hg vs 14 ± 7.5 mm Hg; P = .02), whereas the Sapien 3 device (Edwards Lifesciences) showed similar hemodynamics after ViV in comparison to the Sapien XT device (16.9 mm Hg vs 17.4 mm Hg; P = .5).8,9 In general, clinical data show that supra-annular THV device positioning usually demonstrates better hemodynamics in comparison to devices that are deployed intra-annularly. However, it should be stressed that device characteristics are not the only contributing factor for supra-annularity, as device positioning is also an important consideration in that regard.

Underexpansion of the THV device at the level of the functional valve is commonly a result of the internal characteristics of that device that may not allow for true separation of the leaflet function position from the implanted region (ie, intra-annular devices vs supra-annular valves). However, even a device with potential supra-annular capability may be affected by the annular underexpansion effect when implanted low. 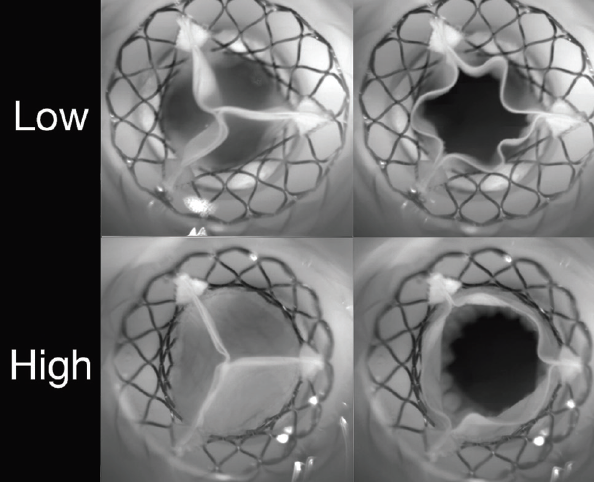 Figure 2. Bench testing of aortic ViV revealing the importance of appropriate device positioning, which can impact effective orifice area during systole and leaflet coaptation during diastole.

The advantage of high device implantation was discovered in the large cohort of cases analyzed in the VIVID registry when it became clear that devices that were implanted low were much more commonly associated with elevated postprocedural gradients.10

The higher position may allow for greater THV expansion, which is especially necessary in small bioprostheses (Figure 2). Later, the relationship of THV positioning and final device expansion has clearly been shown in bench studies as well.11,12 It seems that for each THV, there is a zone in which optimal hemodynamics will be enabled. Clinical data from the VIVID registry suggest that the CoreValve Evolut device should be implanted at a depth of up to 4 mm, whereas the Sapien 3 device should be implanted with no more than 15% to 20% of the frame below the ring of the surgical valve.9,10,12,13

Some TAVR instructions for use contain precautions against performing ViV where the surgical aortic valve is not structurally intact (eg, wireform frame fracture). In addition, the clinical data and anecdotal reports suggest that BVF is not a benign procedure. The observed risks posed by BVF have been reported to include surgical valve leaflet injury/severe regurgitation (if BVF is done first), THV leaflet injury/severe regurgitation (if ViV TAVR is done first), coronary obstruction, pericardial effusion, stroke/systemic embolism, mitral chord rupture/mitral regurgitation, and ventricular septal defect. Theoretical risks posed by BVF include aortic or annular injury, a higher risk of a conduction abnormality, and paravalvular leakage after ViV. It seems that there is still much to learn about the clinical and anatomic features that could predispose one to complications from BVF. One of the main concerns with BVF after ViV is subclinical structural damage to the implanted THV that may result in long-term durability issues. Further research is required to determine the safety, effectiveness, and viability of this technique.

In the current bioprosthetic valve era, it seems that our ability to safely and effectively treat failed tissue valves is more relevant now than ever before. Technical considerations in aortic ViV procedures may improve clinical outcomes and prolong device durability. It is possible that the lessons learned in our ability to treat small surgical valves while enabling optimal hemodynamics could be translated to other subgroups of patients, such as those with small native aortic valves. An important objective for the operator is to ensure optimal hemodynamics that will enable the best possible clinical outcomes for patients with valvular heart disease.

17. Chhatriwalla AK. To crack or not to crack: the role of fracturing bioprosthetic valves during ViV procedures. Presented at: The Structural Heart Disease Summit 2018; June 21, 2018; Chicago, IL.

Are TAVR Hemodynamics Important in the Lower-Risk Population?

TAVR in Patients With a Small Aortic Annulus