Using balloon-assisted tracking as an alternative to femoral access in cases complicated by severe spasm, tortuosity, or radial loops.

For patients who present with an ST-segment elevation myocardial infarction (STEMI), the gold standard strategy for achieving reperfusion is primary percutaneous coronary intervention (PCI).1 However, this invasive approach combined with contemporary aggressive antithrombotic and antiplatelet therapies exposes patients to a higher risk of access site bleeding complications, so it is important to consider any strategy that may potentially reduce these complications.2 Utilizing radial access rather than femoral access for coronary intervention is associated with less access site bleeding and fewer vascular complications.3-5 Radial access rates for PCI in the United States have historically been low, but they are rising given the accumulating data showing the benefit of a radial-first approach and the increasing number of interventional cardiologists trained in radial access. Data from the National Cardiovascular Data Registry CathPCI Registry show a yearly increase of 3% to 5% since 2010 and recent rates up to approximately 35%.6,7

The benefit of radial access is particularly pronounced during primary PCI for STEMI, with reduced adverse clinical events including major bleeding and mortality.8-10 Despite this, radial access for primary PCI has been adopted at an even slower pace and remains underutilized,11 which is likely due to several reasons, including concerns about the possibility that the procedure may be prolonged if radial access is unsuccessful. Guidelines suggest that transitioning to performing primary PCI via the radial rather than femoral approach should not be considered until operators are proficient in radial access, having performed at least 100 elective radial access cases.12 Experienced radial operators achieve similar procedural durations and success rates using radial arterial access for PCI as compared to femoral arterial access,4 but even in experienced hands, a small proportion (approximately 5%) of radial procedures may still require crossover to femoral access to complete.13 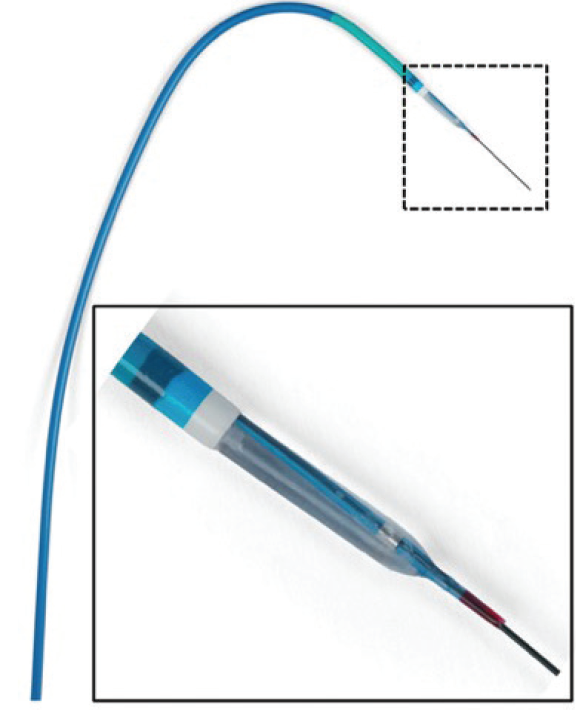 Figure 1. Example of BAT configuration with a standard 6-F guide catheter (Launcher, Medtronic). A semicompliant balloon is loaded onto the 0.014-inch angioplasty wire and partially inflated to taper the distal tip.

Even if there is successful cannulation of the radial artery, there are a number of reasons why it may not be possible to advance the guide catheter into the aortic root, including complex radial loops, tortuousity, artery spasm, and small-caliber radial arteries.13 During these situations, the sharp edge of the guide catheter tip can “dig” into the arterial wall, producing a “razor” effect and resulting in discomfort, difficulty advancing the guide catheter, and even radial artery perforation and forearm hematoma formation.14 The radial artery has a well-developed muscular wall with numerous α-adrenergic receptors that make it prone to developing intense spasm.15 This may theoretically be potentiated by circulating catecholamines and the increased sympathetic drive found in acute myocardial infarction, which may explain why the rates of radial access failure reported in patients treated for myocardial infarction (5.8%–9.4%)8,10,16 are higher than those for stable patients undergoing PCI (5%).13 This normally initiates a switch to femoral access, but if an attempt is made to forcibly advance the guide catheter through an area of intense arterial spasm, there may even be “shaving” of a segment of the wall of the artery, a recently recognized complication.17

Patel et al have described balloon-assisted tracking (BAT), which can overcome radial spasm and difficult anatomy and allows for successful advancement of the guide catheter through the initial arterial puncture.18,19 The BAT technique requires advancing a 0.014-inch angioplasty wire through the affected segment. A 15- to 20-mm semicompliant angioplasty balloon (2 mm in diameter) is then threaded over it and positioned halfway out of the guide catheter. Once in position, the balloon is inflated to 3 to 6 atm (Figure 1). The balloon tapers the distal edge of the guide catheter, preventing the razor effect, maintaining coaxial alignment, and allowing safe and painless advancement of the catheter (Figure 2) in a variety of situations, including small-caliber radial arteries, radial perforation, radial loops, and resistant radial spasm.18,19

The feasibility of routine BAT during difficult radial access in PCI was tested in an experienced radial center.20 In this study, BAT was attempted in 76 of 1,334 patients undergoing radial PCI and was successful in 69 (91%) cases, increasing the institute’s radial access success rate from 92.4% to 97.5%.20 This study included a large cohort (n = 818) of patients undergoing primary PCI. BAT was attempted in 30 cases in which operators had difficulty tracking a 6-F guide catheter to the aorta, with success in 25 (83%) cases. In this group, as expected, there was a delay in reperfusion (measured as procedure start to first device time) if there were difficulties with radial access, which occurred regardless of whether BAT (23 minutes) or crossover to femoral access (24 minutes) was used (compared with procedure to device time if no access issues of 17 minutes).20 There was no significant difference in whether BAT or femoral crossover was used (in fact, BAT was nonsignificantly quicker); however, BAT maintained the advantages of radial access.

There were circumstances in which BAT was not successful, and the majority (6/7) occurred due to failure to pass the 0.014-inch angioplasty wire through the segment of spasm.20 For this reason, a hydrophilic-coated angioplasty wire could be considered to increase the chance of successful wire passage. If spasm occurs during catheter exchange, there may already be a 0.035-inch J-tipped guidewire in the aortic root. In this situation, it is possible to use the “mother-and-child” technique, in which a smaller-bore catheter is introduced into the guide catheter in order to taper the end, filling the space between the 0.035-inch guidewire and the guide catheter edge, which is responsible for the razor effect.21 The inner catheter must be longer than the guide catheter, so a 5-F pigtail catheter (110 cm) is a good choice, although any long diagnostic catheter can be used. The inner catheter must also fit inside the guide catheter. If the internal lumen diameter of the 6-F guide catheter is < 0.071 inches, then a 4-F rather than a 5-F diagnostic catheter may be required. Both a 5-F pigtail catheter and a long 5-F JR4 diagnostic catheter have been used inside 6-F guides to overcome radial spasm during primary PCI.20,21

Special sheathless catheters have been designed with a removable insert that is designed to fulfill this tapering role while acting as the introducing dilator and to also reduce the invasiveness of PCI by eliminating the use of an arterial sheath (Figure 3). The Sheathless Eaucath guide catheter (Asahi Intecc Co Ltd.) has the external diameter of a 6-F arterial sheath and the internal lumen of a 7.5-F guide, allowing for more complex PCI through the same size arteriotomy.22

Sheathless guides have been shown to be effective in primary PCI and were used in 478 patients with STEMI, with a procedural success rate of 97.5%.23 Inserting these guide catheters does require the initial introduction and removal of a radial sheath, keeping a 0.035-inch wire in situ to support advancement of the dilating/tapering insert. This may be overcome using the Railway sheathless guide cath­eter system (Cordis, a Cardinal Health company) (Figure 3), which consists of a dedicated introduction insert that can be advanced directly over a 0.021-inch wire and an exchange insert that can accom­modate the 0.035-inch wire if the guide catheter needs to be changed. These inserts are used with standard Vista Brite guide catheters (Cordis, a Cardinal Health company). The Railway system is CE Mark approved in Europe but is not currently approved in the United States.

The BAT technique is a useful tool to overcome radial access difficulties complicated by severe spasm, tortuosity, or radial loops. BAT can be used in primary PCI as an alternative to crossing over to femoral access, without delaying the delivery of reperfusion therapy and allowing the procedure to be completed without an additional femoral puncture, an important consideration in delivering contemporary evidence-based primary PCI.

Insights Into the FAME 2 and ORBITA Trials

PCI in a Complex Bifurcation CTO

Compensation and Production Trends for Interventionalists